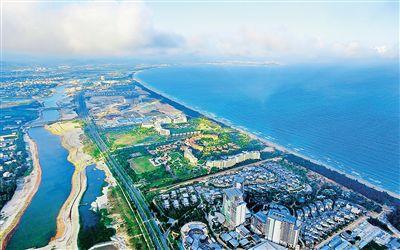 Reclaiming land from the sea has prompted economic growth in China's coastal cities, but nowadays, as it's done for the purpose of property development, it causes worries over housing safety and damage to the marine ecosystem.

Dubbed "Oriental Dubai," Phoenix Island in China's southernmost resort city of Sanya in Hainan Province is a man-made islet that will house a luxury hotel, an international cruise ship port and a health resort center.

Houses on the islet sell for as high as 100,000 yuan (15,384 U.S. dollars ) per square meter–a price driven by Hainan's ambition to build the island into an international tourism destination.

Inspired by Phoenix Island, other coastal cities and towns along the shores of Hainan are considering building similar man-made islets or reclaiming more land from the sea.

The 300-kilometer east coast of Hainan island has already been sold to various property developers, said Lin Hongmin, a former senior engineer at the Hainan Academy for Construction Planning and Design.

In other coastal provinces like Liaoning, Shandong and Guangdong, reclaiming land from the sea for property development is also in full swing.

Dongguan City in southern Guangdong Province plans to invest 8.6 billion yuan to reclaim 4,461 hectares of land from the sea, while Shantou City will build office buildings and high-end housing on a polder of 65.1 square kilometers.

Liu Hongbin, a professor at the Ocean University of China, said some local governments are using polders for property development in pursuit of economic growth because land resources in cities are becoming scarce and pricey amid a soaring housing market.

"Extravagant profits drive this craze to impolder," said Liu, noting that the cost varies from 30,000 yuan to 300,000 per mu, while the earnings will be as high as 100 times the cost.

According to SOA statistics, China reclaimed 13,455 hectares of land from the sea in 2010, resulting in earnings of more than 7.82 billion yuan.

"Stimulated by the profiteering, the land-reclamation programs lack supervision and usually fail to protect the ecosystem," Liu said.

Citizens also have concerns. Yang Jing, a resident of Hainan's capital city of Haikou said there's serious worry about the safety of the land-reclamation programs.

And Yang's fears are not baseless.

In 2010, several apartment buildings erected on a polder in Shenzhen showed signs of sinking, as cracks as wide as 10 centimeters appeared in buildings, and this led to doubts about the safety of buildings constructed on polders.

"Apart from the sinking possibilities, earthquakes and tsunamis also pose serious threats to buildings on polders," said Yang Guanxiong, a former geographical researcher at the Chinese Academy of Sciences.

"To reclaim land from the sea for the purpose of property is too risky," Yang said.

Damage to the marine ecosystem is another consideration.

Statistics from the SOA show that the water area of Jiaozhou Bay, a sea gulf on the southern coast of the Shandong Peninsula in east China, has dropped from 560 square kilometers in 1928 to 367 square kilometers in 2007, mostly because of massive land reclamation since the 1970s.

"We must put the brakes on the disorganized reclaiming of land from the sea because the practice will damage the ecosystem and the results are irreversible," Liu said.

The damage to the ecosystem by excessive reclamation of land is gradual, accumulative and imperceptible," said Zhang Luoping, a professor at the College of Oceanography & Environmental Science, Xiamen University.

"In the short term, the consequences won't be seen, yet the damage will be disastrous over the long term," Zhang said.