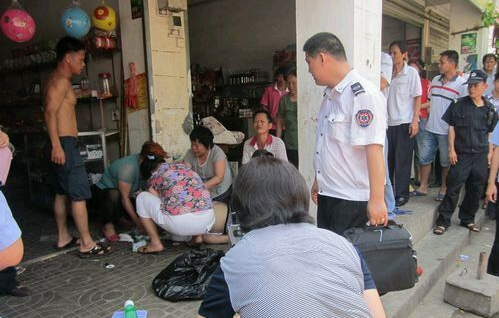 Collapse … the scene in Haikou, China
A CHINESE woman has gone on trial accused of killing a man — by squeezing his TESTICLES too hard.

The unnamed mother is thought to have become involved in a row with a shopkeeper after parking her scooter outside his premises to pick up her daughter.
After he protested that she was blocking off access to his business, she is said to have grabbed his scrotum before shouting: “I’ll squeeze it to death, you’ll never have children again!”
Paramedics were called when the man collapsed from shock, but he was later pronounced dead at the scene in Haikou, China.
And the incident — which occurred in April last year — could now land the woman with life in jail or the death penalty, if the court decides she is guilty of an "especially cruel" murder.
The case continues.
SOURCE: thesun.co.uk
Editorial Message
This site contains materials from other clearly stated media sources for the purpose of discussion stimulation and content enrichment among our members only.