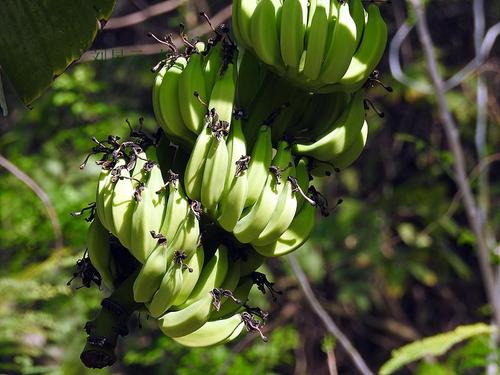 The price of bananas plunged sharply since April this year and is still lower than 2 yuan (about 30 cents in USA dollars) per kilogram this month. In some areas of Sanya, the price nosedives to a record low of 6 cents (in USA dollars) per kilo. Facing the harvest scenery in banana plants in suburban Sanya area, all the banana growers frown and sigh because banana can not sell well in time. The real cause for the fall in banana prices is overproduction and a wrong timing of harvest period this year.
Mr. Li, a banana grower in the Phoenix Town of Sanya, said that because the price of bananas were good last year with an average price of 0.6 US dollars per kilo, he expand the banana growing area to 480 mu in his farm with a loan of 3 million RMB. Contrary to his expectation, the harvest this year pushes him on the verge of bankruptcy. There are several thousands of tons of banana still hanging on the trees and only 1 percent of them are sold. In ten days, if there are no banana dealers of wholesale brokers coming here, the bananas will be of no value and he will sure go bankrupted.
A worker in Mr. Li’s plant says that he has just an income of 1000 RMB per month and if the boss goes bankrupted, he will be jobless, too. His current routine job is throwing the rotten bananas away everyday to certain places. Many banana plant owners are very anxious and worried.  Mr. Hu says with a sad face that if things go like this for another four weeks, all the banana growers in Sanya will be penniless with a huge debt shadowing on their future life. Perhaps they have to give up growing bananas next year because of financial poverty.
Mr. Cai Ke Qing, the director of the section of plant and market information with the agriculture bureau of Sanya municipal government says that another reason for this hard time is that, this year, most bananas ripen two months later than they are supposed to. This year, the harvest time for Sanya banana came during May and June. In previous year, it was in March and April. This delay makes Sanya bananas have to compete with bananas produced in Yunnan and Guangdong provinces on the market. And these two provinces are famous for its large banana growing areas.
Local government spares no effort to facilitate farmers to lower their lost. Relevant governmental sections update information of market frequently and in time.  Logistics system for banana picking and packing are streamlined by government organized working groups. Extra wage of 50 RMB per day is paid to members of the working group to hasten the process. And the government sent a special promotion delegation to the major fruit whole-sale market in Xi’an, Yinchuan, and other cities to invite international fruit whole-sale business men from the Mid-Asia countries like Kazakhstan and Uzbekistan. They hope this will provide some help for the banana growers and minimize their loss in this hard time.

Next news: Western areas of Hainan expected to see rainstorms