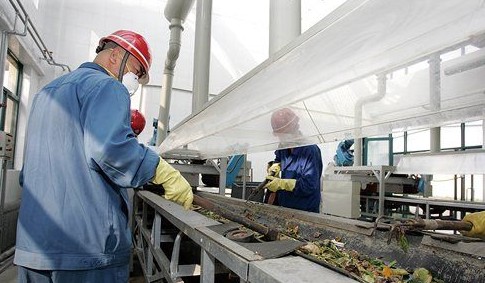 Sanya plans to build a kitchen waste treatment centre as the kitchen waste produced has reached 50 tons each day. (File photo)
The lack of proper facilities on kitchen waste recycling in Sanya has become a public concern as kitchen waste is the major source of recycling cooking oil, reports 0898.net.

At present, there are more than 2,600 restaurants in Sanya. The kitchen waste in Sanya has taken an increasing proportion in the living garbage with no less than 50 tons of kitchen waste daily produced.

The kitchen leftovers, thought to be a good source of digestible energy and high-quality proteins, often end up as feed for livestock such as pigs and chicken, as a supplement to their diet.

However, experts said kitchen leftovers were a source of infection for animals, which, in extreme cases, could result in contamination of meat or eggs and cause illness among people who consume livestock products.

Besides, many people still worry about this kitchen waste will be sold to the black market as cooking oil by some illegal processors due to the potential profits.

At present, the relevant department in Sanya is stepping up efforts to set up a kitchen waste treatment centre to handling the kitchen waste.