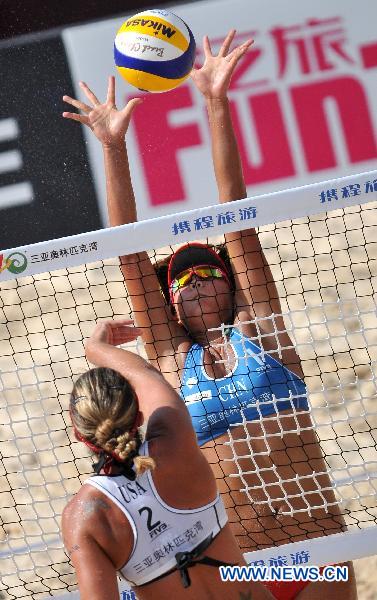 Two-time defending Olympic champions Kerri Walsh and Misty May-Treanor of the United States were forced to withdraw from their semifinal against Xue/Zhang due to a left knee injury of May-Treanor received during the second set.

Juliana/Larissa scored a straight set victory in an All-Brazilian semifinal over third seeds Maria Antonelli/Talita Antunes, their fifth in a row here at the single gender Sanya Open, to advance to the gold medal match scheduled for Sunday morning.

With the 21-18 and 24-22 triumph in 44 minutes, Juliana/Larissa, who have captured five of the last six season’s championships on the international tour, improved their head-to-head results against Antonelli/Antunes to 11-3 and marched on towards back-to-back titles following their success at the Brazilia Open last week.

"It was terrible just now. Even though we won it at the end, I don’t like the match with lot of ups and downs," Juliana said. "Actually, every match is pretty tough, as every player tries hard to play. Besides, I’ ll try to avoid making mistakes tomorrow."

Antonelli/Antunes, who finished fifth last week in Brazil, will vie for the bronze medal with Walsh/May-Treanor Sunday morning if May-Treanor recovers soon enough.

Dropping the first set 21-13 and trailing by 10-8 in the second, the Americans made the decision of withdrawal.

"She injured her left knee and we don’ t know how serious it is," said Walsh. "She is going to have treatment right now and we will see whether she can play or not tomorrow."

"They have been the best players of the world for a very long time and we are always very excited playing against them," said Xue Chen. "I guess they were pretty tired after playing a match earlier at noon, maybe it’ s the reason that we won the first set easily."

Having lost to Juliana/Larissa 2-1 Friday afternoon in the winners’ bracket, May-Treanor and Walsh had to overcome seventh seeds Stefanie Schwaiger/Doris Schwaiger of Austria 21-15, 18-21 and 15-5 in a lower bracket match for a spot in the Top Four.

While the home duo of Xue/Zhang are only one step away from repeating their title winning feat last year in Sanya.

"It will be a tough match," Zhang Xi said of the final. "Every time we play Larissa/Juliana, we play to the third set. And we will get ready for a full set match tomorrow too."

news.xinhuanet.com
Editorial Message
This site contains materials from other clearly stated media sources for the purpose of discussion stimulation and content enrichment among our members only.
whatsonsanya.com does not necessarily endorse their views or the accuracy of their content. For copyright infringement issues please contact editor@whatsonsanya.com