BRICS nations oppose use of force in Libya at Sanya summit 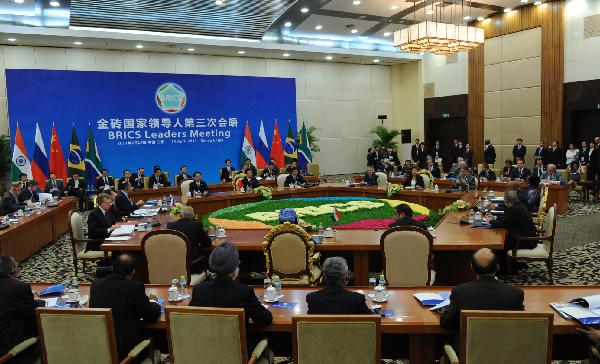 The BRICS Leaders Meeting is held in Sanya City, south China’s Hainan Province, April 14, 2011. (Xinhua/Li Xueren)
Leaders of five of the world’s major emerging powers said Thursday the use of force in Libya and the Arab world should be avoided, at a summit intended to showcase their growing global clout.

The leaders of Brazil, Russia, India, China and South Africa also warned in a joint statement that volatile commodity prices could slow the global economic recovery and that huge capital flows could hurt the developing world.

The leaders were seeking to present a united front as they push for their countries to have a bigger say on the world stage, particularly within the United Nations, the International Monetary Fund and other global institutions.

The five nations — which together represent more than 40 percent of the world’s population — said their unusual joint presence on the UN Security Council in 2011 offered an opportunity to work together on Libya.

"We are of the view that all the parties should resolve their differences through peaceful means and dialogue in which the UN and regional organisations should as appropriate play their role," the leaders said in the statement.

"We share the principle that the use of force should be avoided. We maintain that the independence, sovereignty, unity and territorial integrity of each nation should be respected."

South Africa was the only BRICS nation to approve a UN Security Council resolution establishing a no-fly zone over Libya and authorising "all necessary measures" to protect civilians, opening the door to coalition air strikes.

The other four countries have expressed concern that the NATO-led campaign — which aims to thwart Moamer Kadhafi’s assault on rebels seeking to end his 41-year rule — is causing civilian casualties.

The statement, however, did not specifically single out the NATO campaign.

On the economy, the five countries — whose combined GDP accounted for 18 percent of the global total in 2010, according to the IMF — expressed concerns about risks to the global recovery.

"We note that the world economy is gradually recovering from the financial crisis, but still faces uncertainties," the BRICS leaders said, supporting moves to reform the international monetary system.

"Excessive volatility in commodity prices, particularly those for food and energy, poses new risks for the ongoing recovery of the world economy," said the countries, many of which are experiencing high consumer inflation.

"We call for more attention to the risks of massive cross-border capital flows now faced by the emerging economies," they added.

Goldman Sachs economist Jim O’Neill first coined the term BRIC in 2001 to describe the growing influence of the world’s four largest emerging economies. South Africa was invited to join the group at the end of last year.

"The BRIC economies are increasingly the major story for the world economy — they have lifted the world economy’s growth trend from 3.7-4.5 percent in my view," O’Neill was quoted as saying by the official China Daily newspaper.

The five nations called for "comprehensive reform" of the United Nations, including the Security Council, "with a view to making it more effective, efficient and representative".

China and Russia are veto-wielding permanent Security Council members. India has long pressed for a permanent seat, while South Africa and Brazil are part of campaigns to see better representation for Africa and Latin America.

Russia has supported India and Brazil’s bids — moves not endorsed by China.

One issue not mentioned in the wide-ranging statement was China’s controversial exchange rate regime.

Brazil believes the yuan is undervalued, giving China an edge on exports and hurting the South American nation’s trade balance.

SOURCE: www.bangkokpost.com
Editorial Message
This site contains materials from other clearly stated media sources for the purpose of discussion stimulation and content enrichment among our members only.
whatsonsanya.com does not necessarily endorse their views or the accuracy of their content. For copyright infringement issues please contact editor@whatsonsanya.com