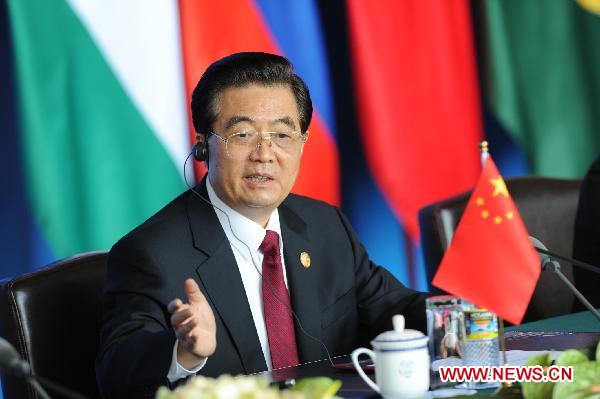 Chinese President Hu Jintao makes remarks while meeting the media with leaders of other BRICS countries in Sanya City, south China’s Hainan Province, April 14, 2011. (Xinhua/Li Xueren)
Leaders from the five BRICS countries told the press on Thursday that they have reached consensus on major issues like global economy and finance at a summit held in the southern Chinese resort city of Sanya.

"Documents adopted at the summit reflected the leaders’ consensus on major issues like global economy, finance and development. The documents also outlined the countries’ future cooperation," Chinese President Hu Jintao said at a joint press conference after the summit.

The leaders also agreed to deepen exchanges and cooperation in industry and commerce, science and technology as well as agriculture, Hu said.

"We agreed to hold the next BRICS summit in India next year," said Hu, who chaired Thursday’s summit.

Brazilian President Dilma Rousseff said at the press conference that the BRICS countries will further strengthen coordination and increase dialogue.

Rousseff said the BRICS countries has displayed great potential in coping with financial crisis and the bloc is now playing an increasingly important role in the fields of economy as well as politics.

Russian President Dmitry Medvedev said the BRICS mechanism was "unique" thanks to their economic power, political influence and development potential.

The five countries shared common stance on the reform of the international financial system, the reform of the World Bank and other issues like the price fluctuation of agricultural products, he said, adding that consensus reached at the summit will be presented at the Group of 20 summit, slated for November in France.

He said the recovery process might be affected by uncertainties, including the turmoil in west Asia and north Africa and Japan’s nuclear crisis ensuing from the devastating earthquake and tsunami.

BRICS is an acronym for five fast-growing emerging economies — Brazil, Russia, India, China and South Africa. Combined gross domestic product of the nations accounted for 18 percent of the world’s total in 2010.