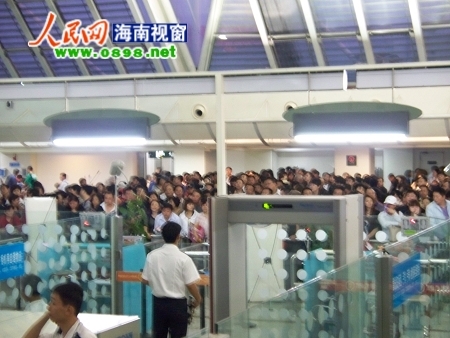 Hundreds of angry passengers blocked the security check passage at the Sanya Phoenix International Airport around 5:00 of March 13th due to the airline failing to timely arrange passengers‘ accommodations, as their flight was diverted to Sanya, reports 0898.net.

In the evening of March 13th, passengers from 5 different flights for Haikou were told their plane was forced to land in Sanya airport instead of Haikou due to heavy fog.

"Before landing in Sanya, we were told that the airline company will arrange our accommodation. However, after hours-long wait for the arrangement, we didn’t see anybody trying to pick us up for accommodation,” said Mr. Duan, one of the passengers stranded at the airport.

"It was complete chaos. People didn’t know what was going on and were so angry that they lifted the seats to block the check-in counters”, said one of the passengers, Mr. Wang, angrily.

More than 500 to 600 stranded passengers were involved in the incident to show their complaint for such unreasonable treatment.

The incident even disrupted other normal flights early morning that day.

After a series of negotiation, the airline companies have apologized and decided to compensate RMB150 for each passenger. At present, all the stranded passengers have left and boarding is back to normal.