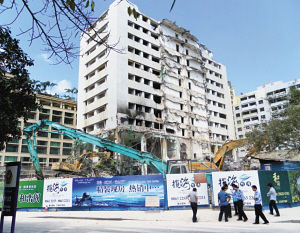 A dangerous building near the Sanya Municipal Government Office Building on Hexi Road suddenly partially collapsed on Feb. 27. The accident resulted in the partial blockade of a sidewalk and road. Luckily, nobody was injured in the accident, reports hinews.cn.

The accident happened around 9:50 am when a car carrying a family of three was passing by.

“It was so terrible, just like a stunt shot happening in a movie,” said Mr. Zhang, an eyewitness who was driving his car with his family through the dangerous site.

After hearing a loud boom, some residents on the road began running away and saw puffs of dust and rubble over the air and road.

The building, which had been partially demolished up to 10th floor, was considered at risk of collapse by many residents living nearby.

According to the building’s owner Mr. Zhang, the 18-floor building was originally a dangerous building and they decided to build a commercial residential building upon its demolition.

When the demolition was conducted up to the 10th floor, however, considering its structure and demolition techniques, the building’s owner had been discussing to carry out a new demolition which led to the building collapse.

At present, Mr. Zhang said they have required the construction to immediately stop and asked workers to clear up the debris on the road. Officials will further investigate the accident thoroughly and check the safety of this demolition program.