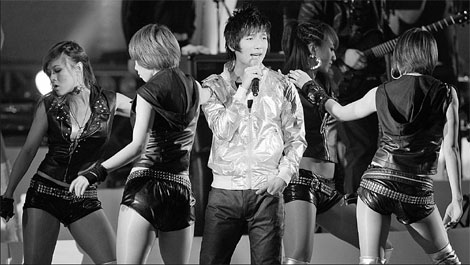 Becoming famous overnight has brought Chen Chusheng his fair share
of trouble, and he longs for the simple life away from the limelight.
Putting the troubles of the past behind him, Chen Chusheng is all set to take his music to a new level. Chen Nan reports.

Chen Chusheng’s rise to fame was nothing less than meteoric. But the overnight success also cut into his privacy and dimmed his enthusiasm for song writing. The champion of the 2007 Super Boy (Happy Boy) singing competition says he would rather be a pub singer or a guitarist than a star under the spotlight. "You may think I am lying and pretending. But that’s true," Chen says quietly in an interview with China Daily. "I miss the days when I sang and played the guitar in the bars of Shenzhen. I didn’t have to cater to anyone but myself, and I love that feeling." The 29-year-old from Sanya, Hainan province, says he received his first guitar from his parents when he was 16 and started his pub singing career in his hometown while still in high school.

"I was also good at other activities such as kungfu, soccer and fishing, but music was my favorite. My parents played a lot of music at home and I would sing along. They gave me plenty of freedom to fulfill my dream, but never thought about my becoming famous," Chen says. "All they hoped for me was to be happy and healthy, and that’s true even today."

He left for Shenzhen when he was 19 to realize his dream and "further his musical skills". He spent most of his time listening to different genres and writing his own songs during the day. Singing in bars allowed him to observe life and inspired his lyrics.

"People visit bars for various reasons and have different moods – some are sad, some happy and yet others are introspective. I observed them and tried to guess their life stories," he recalls.

"I didn’t experience any hardship when I sang at those small bars. The was happy doing my dream job," he adds.

One of Chen’s most popular hits, Has Anyone Told You, was born out of his bar experiences in Shenzhen, when he lost his girlfriend and his brother was hurt in a car accident. Its lyrics express the sadness and confusion he experienced. The song was officially released in 2007 and won him numerous awards across the country. 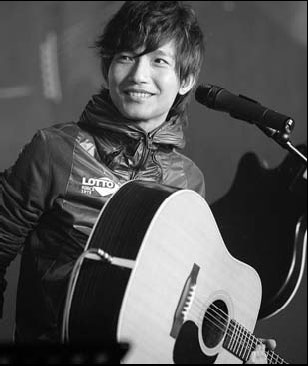 Chen became a household name in 2007 after winning the Super Boy singing competition.
As Chen gathered his musical inspirations and polished his singing and guitar playing, he started participating in singing competitions, and quickly began to be noticed.

In 2001, he won the Most Potential New Artist award at the Asia Music Awards held in Shanghai and in 2003, he won the championship at the National Pub Singer Competition held in Hunan province, which offered him a contract with EMI, which he left in 2005.

When he first joined the Super Boy singing competition, his smooth mellow voice, shy smile and original songs had nearly 1 million fans voting for him.

Recalling the competition which made him a household name, he says: "It was a pretty stressful time leading up to the finale and a lot of work. After it was done, I thought I could breathe. I got signed to a major label, I got to make an album and hold my own concert. That was what I expected from the show and I got it."

However, Chen later discovered that fame means much more than glamour and applauding crowds. He didn’t know it would also mean photographers following you around and being recognized wherever you go. "There was a lot of work that had nothing to do with music and considerable lack of privacy. It was hard because sometimes I didn’t want to be where I was. I am someone who can’t adapt very quickly but I had to," he says.

In 2008, Chen filed a lawsuit to terminate his contract with E.E. Media, the management company behind the phenomenally popular Super Girl and Super Boy singing competitions, accusing them of unauthorized publication of his family photos and childhood stories for commercial use. Chen quit a New Year live concert of Hunan Satellite Television on Dec 31, 2008, which led to a huge financial loss for the company. Chen ended up having to pay up to 10 million ($1.5 million) in compensation. In January 2009, he broke up with the company and withdrew from the spotlight.

"I tried to concentrate on my song writing but couldn’t. I was so worried because I thought I had lost the ability to write music," he recalls. "I stayed with friends and kept talking to them, sharing my worries, confusion, anger and despair. Gradually, I relaxed and began considering my next step."

He stayed at home, playing computer games, reading books and hanging out with friends, "just to be simple and happy", he says. After an eight-month break, he signed a contract with Huayi Brother Music Company, released an album and held his first Beijing concert in December, 2009.

The past year has been a busy one for Chen but he likes it that way. He has just released a new album of his songs for movies such as Zhang Yimou’s Hawthorn Tree Forever and Feng Xiaogang’s If You Are the One II. He is also preparing for his upcoming concert, his first collaboration with Harbin Symphony Orchestra, at Beijing Exhibition Center Theater (Beizhan Theater) on Jan 8.

"I have never worked with a symphony orchestra before. It’s a challenge but I am keen to experiment," he says. "The venue is mid-sized and I like it very much. I feel close to the musicians and the audience."

Despite the pressure and the ups and downs of the past, Chen is grateful for the experience. "Everybody needs to grow up and that process is not easy," he says. "But the only thing that will not change is my faith in music.

"I will leave the spotlight but my music is still a dream worth holding on to."