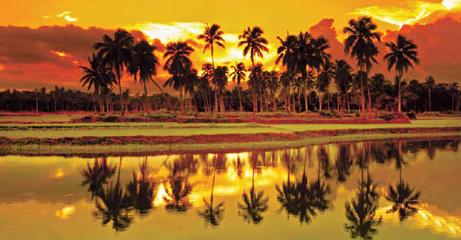 Haitang Bay in Hainan province, which has been under development since 2007, is still full of unspoiled nature.
Haitang Bay is fast becoming Hainan’s most happening address, Yu Tianyu discovers.

While Yalong Bay and Dadonghai Bay in Hainan, also known as "China’s Hawaii", are well-known, Haitang Bay is fast emerging as a formidable contender.

A popular legend surrounding Haitang Bay is that about 1,000 years ago, a young woman named Haitang left her boyfriend and sacrificed herself to the Dragon King to save starving local fishermen.

Luo Baoming, governor of the province, has urged all parties to seize every opportunity to make Haitang Bay a world-class tourist resort.

Unlike Yalong and Dadonghai, Haitang Bay is still full of pristine beauty.

Zhao Leiwu, deputy Party secretary of Haitang Bay township, says: "Haitang Bay will be not just a world-class vacation paradise but also a national center for marine research and education."

So far, it has attracted more than 24.1 billion yuan ($3.6 billion) in investment. The comprehensive development of the bay has been entrusted to the United States-based EDSA landscape and design firm, Zhao says.

More than 32 five-star hotels will cling to the emerald beaches of the bay, including Hilton, Kempinski, Sofitel, Fairmont, Grand Hyatt, Sheraton, Shangri-La, InterContinental and Renaissance.

Conrad and Doubletree Sanya Haitang Bay by Hilton, due to open in December, cater to different types of Chinese guests, says Gerd Knaust, the general manager.

Doubletree is a Hilton property known for its young and family-oriented style. Its 472 spacious ocean-view guestrooms are housed in low-rise buildings set amid tropical gardens.

Conrad, which is more business-oriented, has 101 private villas sitting adjacent to a beach and the clear waters of the South China Sea, offering spectacular views.

Haitang Bay has much potential in terms of its size and natural resources and is also well-planned with a mixture of hotels, residential areas, entertainment and shopping facilities, Knaust says.

It is located 28 km east of Sanya city and 45 minutes from Sanya International Airport.

Zhao says that by the end of 2011, 10 luxury hotels at the bay will be open to guests. The entire coastal hotel zone is expected to be ready within five to eight years.

Haitang’s high-end leisure activities will include a 24-hour yacht port, yacht club and a yacht-themed park along with six professional golf courts.

The South China Film and Television City will also be located here and come with a theme park and a movie production base.

A tax-free shopping center, with 250,000 square meters of shopping area, will stock up on nearly all luxury brands worldwide.

Zhao says an 18 sq km area will be earmarked for a natural wetland park, a mangrove protection zone and some spa resorts.

The local government is pumping in 7 billion yuan for seven towns inside Haitang Bay to showcase local culture as well as to settle 38,000 relocated residents.

The People’s Liberation Army General Hospital’s Hainan branch will also be located at Haitang Bay and position itself as a national coastal medical services base.

Another 5 sq km will be used for a tropical aquarium, ocean-themed park, ocean university and state-of-the-art ocean research center.