Updated: 2010-11-14 01:30:23
MGM Resorts International plans to make a big impression on the mainland by partnering with Diaoyutai State Guesthouse. 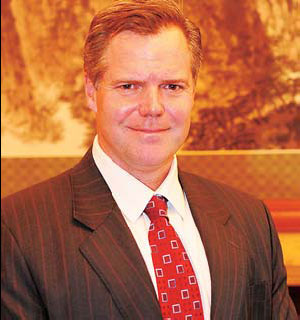 Beijing, Sanya, Tianjin, Chengdu and Shanghai are all scheduled to open MGM hotels from 2011 to 2014. The Diaoyutai Art Hotel, near Yonghegong Lama Temple in Beijing, will be the first to open, in August 2011.

James J. Murren, chairman and chief executive officer of the company, says the brand has broader business interests than just its famed Las Vegas and Macao casino and gaming businesses.

The change of name from MGM Mirage to MGM Resorts International, since June, reflects the company’s new strategy of emphasizing its non-gaming business globally.

Diaoyutai MGM Hospitality, a joint venture between Diaoyutai State Guesthouse and MGM Resorts International, will be responsible for hospitality development on the mainland.

"We’re very proud of and appreciate our partnership with Diaoyutai, whose reputation is known around the world. Its service, quality and brand is synonymous with excellence," Murren says.

He believes the partnership is "incredibly valuable" and has special insight into local customers’ tastes.

Having had a taste himself for top-class art since he was young, Murren expects his first hotel in Beijing to be a work of art and a landmark, hence the name: Diaoyutai Art Hotel.

"It’s small, like a boutique hotel, but very unique, very high-end, only targeting affluent people with a holistic view of life of physical fitness, of cultural awareness, of art and of humanity," he says.

The property has just 103 rooms but will have a large spa with natural spring water.

The small but impressive start signals big things to come.

By the end of 2011, the joint venture will be dealing with over 20 projects. Five years from now, 50 projects will be underway in China, including meeting, incentive, conference and exhibition (MICE), entertainment, office, residential and retailing projects, in at least 20 cities.

In Macao, MGM’s joint venture with Pansy Ho, daughter of casino mogul Stanley Ho, has been developing smoothly. It filed an A-1 Hong Kong Stock Exchange listing about one-and-a-half months ago for its initial public offering.

"We’re going to list 20-25 percent of the total enterprise ($1.2 billion). I can’t predict very specific in terms of timing but I can say we’re ready", Murren says.

He says the company’s property business in Macao is becoming increasingly profitable.

"So the timing is very fortunate for us," he says.

In May, he met with Vice-Premier Wang Qishan and they talked for one-and-a-half hours about a wide range of topics, from bilateral politics and currency, to tourism and its development in China.

When talking about its human resources strategy, Murren says he is good at recognizing people’s talents and motivating them.

"The great motivating factor is when you are in the middle of the project you are in a crisis situation and overcome the pain and stress," he says, recalling how tough it was to build Las Vegas’ mega-complex, CityCenter, during the recession.

To make it clear to investors and guests, MGM Resorts International emphasizes it is not affiliated to MGM Studios, which is a separate entity with no common ownership. The latter has been under focus as it filed for bankruptcy on Nov 3.