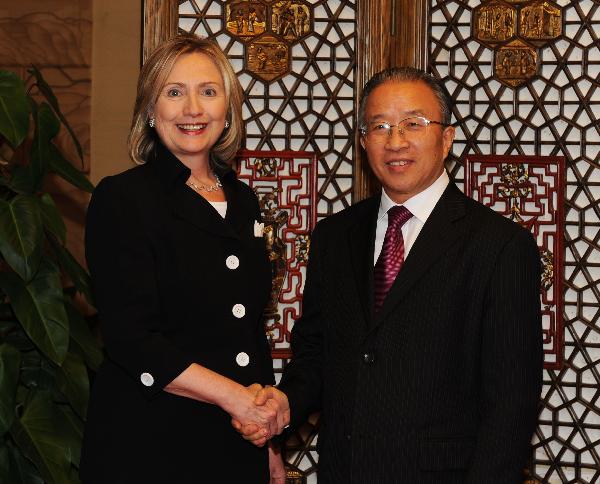 According to the ministry, Dai and Clinton had positive evaluation of recent Sino-US relations, and stressed the two sides would continue to seriously implement the consensus reached by the two state leaders.

They pledged to enhance dialogue, mutual trust and cooperation, properly handle differences and sensitive issues on the basis of mutual respect, and make concerted efforts to contribute to a positive, cooperative and comprehensive China-US relationship in the 21st Century.

They also agreed that Chinese President Hu Jintao’s scheduled visit to the United States early next year is of great significance to the development of bilateral ties, and the two sides would keep close contact and make preparations to create favorable atmosphere and ensure the success of the visit.

They also exchanged views on the situation of the Asia-Pacific region and the upcoming G20 summit in Seoul.

Clinton flew to Sanya from the 5th East Asia Summit in Hanoi, where she was invited to attend the summit as a special guest.

She met with Chinese Foreign Minister Yang Jiechi earlier Saturday on the sidelines of the summit, exchanging views on bilateral relations and issues of common concern.

Previous news: Miss World Alexandria Mills back in US from Sanya, with the world at her feet