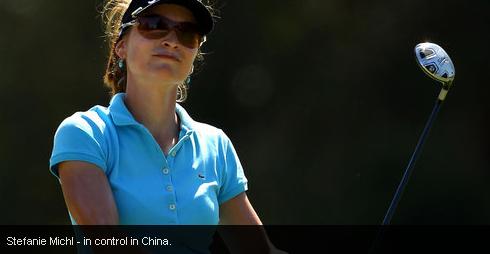 The 24-year-old from Graz shot a 70 to add to her opening 65 to finish on nine under par, leading England’s Florentyna Parker (69) by two and South African Lee-Anne Pace (71) by four.

Australia’s Nikki Garrett and Lin Tzu Chi of Chinese Taipei are a shot further back in a tie for fourth.

England’s Melissa Reid hit a 68 to move to two over, despite having played the closing holes after being bitten by a snake.

The 23-year-old was struck on the leg while playing the 16th and received treatment on the course.

She was later taken to hospital for tests but is expected to be fit to play the final round on Sunday.

SOURCE: The Press Association
Editorial Message
This site contains materials from other clearly stated media sources for the purpose of discussion stimulation and content enrichment among our members only.
whatsonxiamen.com does not necessarily endorse their views or the accuracy of their content. For copyright infringement issues please contact editor@whatsonxiamen.com