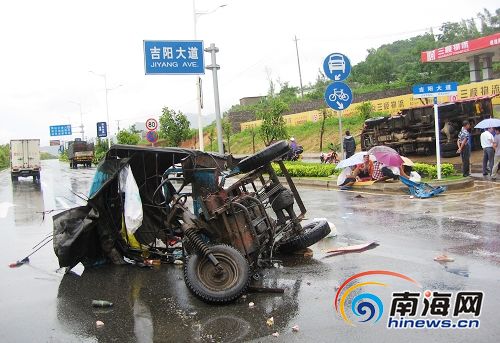 In the afternoon of Oct 16th, three vehicles collided near the junction of Sanya Jiyang Avenue and the east line superhighway, leading to 1 death and 7 injuries, reports hinews.cn.

According to witnesses, the accident happened at about 15:30 p.m. when it was raining heavily in Sanya. A farm vehicle had a serious collision with a truck loaded with bricks. Sadly, the driver of the farm vehicle died on the spot while 7 others in the vehicle were all injured.

The truck driver called the police shortly after the accident and then left. Some witnesses dialed 120 and the wounded were taken to hospitals soon afterwards. In addition, a Ford, whose plate number is Qiong(琼) C90D70, also was parked on the sidewalk for it was too late for the driver to avoid the crash after seeing what happened.

The dead and the wounded are all villagers of a nearby village. The dead driver is 50 years old, who still has to support his parents, disabled brother and 4 children. Besides, traffic police told the reporter that for fear of being beaten by the dead driver’s family, the truck driver went to turn himself into the local police station after he called the police. At present, all the 7 wounded are still being treated in local hospitals.