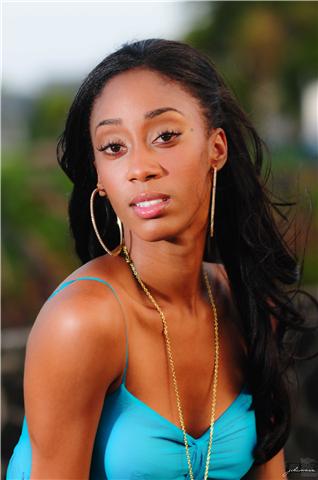 Miss SKN Fatisha Imo
Fatisha Imo is currently in China representing the Federation at the 6oth Annual Miss World Pageant. The prestigious pageant will be held on the 30th of October in Sanya, China. 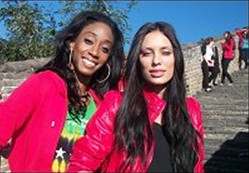 Fatisha Imo and another contestant enjoying the sights in China.
Ms. Imo arrived in Beijing on the 2nd of October, and the very next day showcased her Traditional Dance, the Mockojumbie. She learnt the art of Mockojumbie dancing during her preparations in the summer; after just four practices with her instructor Pica, she was dancing like a pro on 6ft stilts. The panel of judges, along with the other contestants, were excited and cheered loudly at the end of her performance. Fatisha said that she was so nervous hearing nearly 120 people clapping and cheering in the room, while she was about 12ft high in the air.

Talent preliminaries were also done on the 3rd of October and Ms. Imo danced a contemporary piece to the song “Father Can You Hear Me.” The panel of judges commended Fatisha and gave her thumbs up after the emotional performance. She has now made it to the finals for talent out of 119 girls, and has been asked to dance the Mockojumbie instead of her contemporary dance. Back in Nevis, she held a dance workshop entitled "I Feel Like Dancing" during the summer, attended by over 70 students and has decided to host another one during December.

Fatisha has been in China for approximately two weeks now and has visited Beijing, Mongolia, and Shanghai. During the tour of various cities, she has visited the Great Wall, the Olympic Stadium, Badachu Ancient Temple, Genghis Khan, Shanghai International Expo, and attended many welcoming ceremonies and galas.

Ms. Imo also attended the Miss World Charity Auction Gala, where a painting of a masquerade that was donated by Cameron’s Art Gallery was auctioned off. Justin Li Bolin, Executive Director of ATMU Group in Beijing, China, bought the painting.
Fatisha said that Mr. Bolin came up to her and just hugged her, and told her that he was so proud to see St. Kitts and Nevis being represented in the Miss World Pageant. Mr. Bolin has a St.Kitts & Nevis passport, which explains why he was so excited when he saw Ms. Imo. Each contestant brought a gift from their respective countries to auction, and the profits raised will be going to needy causes in China.

On competing in the Miss World Pageant Fatisha said, "This is a lifetime opportunity and I never thought I would ever reach this far in pageantry. From the age of 10, I always dreamt of entering the Miss World or Miss Universe Pageant. I did it! This is one of the most precious moments in my life. I cried like a baby when I was at the Great Wall, because I never thought I would get to see it in real life. I usually see it on the TV. I’m proud to say that I am walking in the footsteps of my Godmother Haley Cassius, who was the first person to ever represent St. Kitts and Nevis in the Miss World Pageant in 1988. I am marketing my Federation in every way possible. I brought many books and brochures with me, and have been handing them out during tours to many locals and tourists. I would like to thank everyone who has assisted me in any way possible, especially my family and the Miss World St.Kitts Nevis Executive Committee. Thank you".

SOURCE: The Observer
Editorial Message
This site contains materials from other clearly stated media sources for the purpose of discussion stimulation and content enrichment among our members only.
whatsonsanya.com does not necessarily endorse their views or the accuracy of their content. For copyright infringement issues please contact editor@whatsonsanya.com