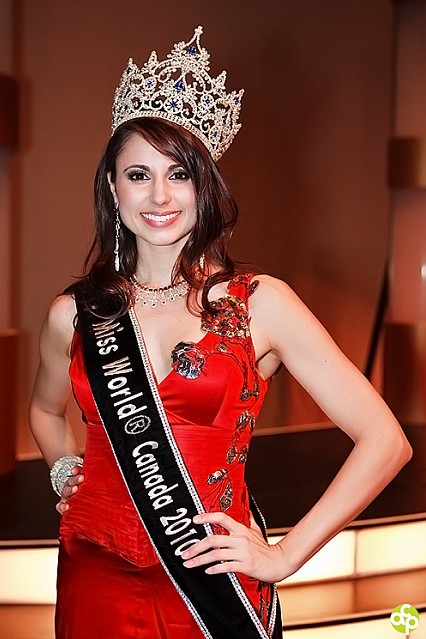 Miss World Canada 2010 Denise Garrido eyes on world title in Sanya
Canada’s entry into Miss World contest is hoping that her gown made by a noted Chinese-Canadian dressmaker will make a difference in helping her to secure the crown.

Denise Garrido, a 23-year-old Ontario native, won the title in May in Vancouver, beating a field of more than 30 candidates.

She returned to the west coast city over the past week for her fittings with designer Sandra Sung prior to catching a plane late Wednesday night to China. The pageant will be held in October in south China resort city of Sanya.

Sung, one of Canada’s most prolific bridal designers, has created several outfits for Garrido, including a stunning gown in a mermaid-style cut that flares out in a "poof" at the bottom.

"Sandra described the color as midnight blue so it’s a very, very dark blue. But it has elements of green as when it reflects in the light you kind of see a green tint. The color is really lovely. It’s a one shoulder dress, …, that’s really, really nice," said the biomedical sciences graduate.

"After talking to her and seeing her designs, she has very elegant styles. She really knows how to fit a dress to a girl. Trying it on yesterday, it fit like a glove. It’s very, very well done," said Garrido, who will be lugging around four suitcases in her travels through Beijing, Shanghai, Inner Mongolia and Hainan Island.

As a veteran of several beauty contests, including the environmentally-themed Earth pageant in the Philippines, the 178 cm, 61 kg Garrido said she liked to mix things up at the events to showcase her many talents.

At the Miss World Canada pageant she impressed the judges with her speed painting, while in China she will tinkle the ivories to demonstrate her piano skills. "Recreationally, piano was just something I did here and there as a kid. In university I didn’t do it much, so I picked it up again for the Miss World and it’s something you never forget."

Another of her talents is tae kwon do. "I did martial arts as a child, so I’m very strong. Coming to China was something I had dreams about as a child and I’m really hoping I can see some martial arts when I’m there," she said.

Garrido, who is planning for a career in medicine, likely in oncology or orthopedics, said for now she was concentrating on pageants and seeing what opportunities could open up for her after winning the Miss World Canada title.

"I’ve done a few pageants before. I kind of call it the pageant bug. Once you done one you kind of want to keep doing them. They are so much fun. It’s just all the people that you meet, the places you get to go, the experiences and the networking. It’s just so rewarding and so much fun and yeah, you kind of get addicted to it because you want it. You just crave this traveling and the extras that go along with it and all the things you can do with a title," Garrido said.

She was particularly excited to be coming to China as the Miss World contest, the oldest surviving international beauty pageant, returns to Sanya following a two-year absence. Last year, Gibraltar’s Kaiane Aldorino won the title in South Africa.

"When I found out the pageant was going to be held in China I pulled out a documentary and watched it because I just wanted to be as involved and knowledgeable before going, just to kind of see how diverse a country it is from east to west, north to south," Garrido said.

"I’m really excited. There’s just so much history to take in."

Next news: Miss Nepal 2010 Sadichha Shrestha to compete for Miss World 2010 in Sanya