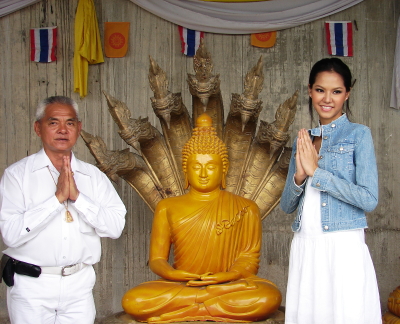 Miss Sirirat and Mingmongkol Faith 45 Foundation chairman Suporn Vanichkul
at the base of the Big Buddha image in Karon yesterday. 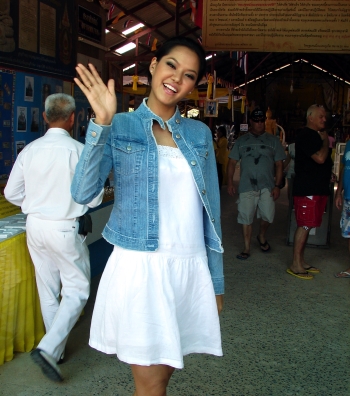 Miss Sirarat will compete for the Miss World title in China next month when tens of thousands of
Phuketians will join her by abstaining from meat during the annual Vegetarian Festival.
Heads were turning yesterday as Miss Thailand World 2010, Sirirat ‘Noo Si’ Rueangsri, paid her respects to the Big Buddha image high up in the Nakkerd Hills in Phuket.
Ms Sirirat, a 22-year-old law student from Chiang Mai, was in Phuket for a one-day visit to fulfill a promise she made to herself to revisit the site if she won the Miss Thailand World 2010 pageant in Bangkok.
The trip to Phuket became obligatory when she was crowned Miss Thailand World 2010 on August 14.
Ms Sirirat arrived at Phuket Airport with her aunt at 10am and went straight to the Big Buddha, officially known as Phra Puttamingmongkol Akenakkiri.
“I once visited here when I was a contestant participating in a one-month training camp in Phuket before the final round of Miss Thailand World, but I missed the chance to pray before the Big Buddha image,” she told the Gazette.
Due to a tight schedule, she only had time to visit the entrance pavilion.
“I prayed for success in the contest, vowing I would return here and never eat meat again my entire life [if I won],” she said.
Suporn Vanichkul, chairman of the Mingmongkol Faith 45 Foundation that built and maintains the image, was more than pleased to show Ms Sirirat around the site and explain its history.
He proudly introduced Miss Thailand to tourists eager to have photos taken with the young beauty.
Ms Sirirat was impressed with the vista from the hills of Phuket Town and local beaches.
“The view is so amazing and the water is so clear – such a beautiful place,” she said.
SOURCE: Phuket News
Editorial Message
This site contains materials from other clearly stated media sources for the purpose of discussion stimulation and content enrichment among our members only.
whatsonsanya.com does not necessarily endorse their views or the accuracy of their content. For copyright infringement issues please contact editor@whatsonsanya.com

Previous news: Sanya on its way to become a ‘Solar Energy City’

Next news: Mimi Areme to represent Ghana at 2010 Miss World competition in Sanya