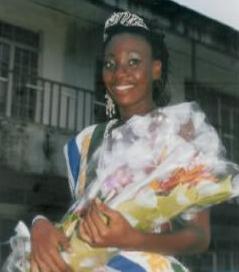 Miss Sierra Leone Neyorny Willams
Neyorny Willams, aged 19 years, is entrancingly – even, bewitchingly – beautiful, with smooth Negroid skin, but with slightly slanted Asiatic eyes, and Caucasian wide eyes, lacking the Asiatic slant. She was crowned Miss Sierra Leone 2010 on July 30 at the Family Kingdom Entertainment Complex in Aberdeen, Freetown. She will represent Sierra Leone in Miss World 2010 in Sanya, in the People’s Republic of China on 30th October, 2010.

On September 20, 2010, she paid a courtesy call on President Ernest Bai Koroma at State House, as she prepares to go for the Miss World Competition. It will be month-long tour of exciting places in China, including the capital city Beijing, and the centuries-old Inner Mongolia .

The Miss World-2010 website states the ‘ambition’ of Neyomy includes using her beauty to “rebrand Sierra Leone”. It is hardly a wonder that President Koroma puts a lot of premium on the lithe 19 year old with the strange name, “Neyomy”, who is pursuing an international course in Human Resource Management with the Cambridge University: “The impact that this representation marks is as important as the role of our ambassadors in foreign missions. You are going out there to represent all of us, and I enjoin you to ensure that we are adequately represented. We are all proud of you, and I believe you will make us proud in China”, President Koroma said leaving for the United States on his own rebranding of Sierra Leone exercise.

A former St. Joseph’s Primary School and St. Joseph’s Convent in Freetown, Neyorny certainly would have imbibed the moral qualities injected into pupils in that top Catholic school, and a tertiary level student, obviously has the intellectual capacity to burnish the image of Sierra Leone in the land of almost a billion and half people.

The Miss World Competition started in 1951 in London, England. Today, it is a very prestigious event and the most beautiful woman who takes the crown gets a cash prize and loads of beauty items, dresses and accessories. The Miss World title goes to the woman who is both beautiful and intelligent. Inner beauty and personality is also taken into account while choosing a winner.

In 1970, on the twentieth Miss World contest, for the first time in Miss World history, two black women topped the contest when Jennifer Histen from Grenada swept the title, and Pearl Jansen from South Africa became the first runner up. Miss Agbani Darego, an 18 year old Nigerian computer science student and the first Miss World of the 21st Century, became the first Negroid African to win the title. That gives hope that the smooth-skinned Neyormy can win the Miss World title for Sierra Leone – and sending Salone’s image shooting through the stratosphere.

‘Beauty is in the eyes of the beholder’, a trite saying has inculcated into our minds. But, thanks to globalization and the omnipresent and omnipotent global media largely controlled by the developed countries, standards of what is beautiful, especially feminine beauty, is now almost universal – one must be model-thin, tall, with firm trim waist, and not too buxom. And, physical beauty is not just an abstract asset.

Researchers have found that good looking students get higher grades from their teachers than students with an ordinary appearance. Furthermore, attractive patients receive more personalized care from their doctors. Studies have even shown that handsome criminals receive lighter sentences than less attractive convicts. Psychology books by reputed authors postulate that salesmen, T.V. personalities, etc. who are said to be beautiful by western standards are more likely to be employed, and earn the highest paychecks . (Like Sierra Leone’s captivatingly beautiful Isha Sesay on CNN). How much money a person earns may also be influenced by physical beauty. One study found that people low in physical attractiveness earn 5 to 10 percent less than ordinary looking people, who in turn earn 3 to 8 percent less than those who are considered good looking. People who are said to be beautiful are more likely to be believed what they speak in public. So, we do have a National Asset in Neyorny. It only seems natural that a beauty like Neyorny has emerged from Sierra Leone.

Sierra Leone has been endowed with one of the most beautiful environments in the world. Our beaches are one of the most idyllic – with breathtaking beauty in both our pure white and tantalizingly yellow beaches on beaches like are found in Kent and No 2 River in Freetown; and the pristine white sand beaches on the ocean-front side of Bonthe Island. The warm waters of our ocean ten degrees from the equator are ideal for swimmers. Our coastline, so close to mountains when viewed from the beaches, and the sea, makes Freetown overpoweringly beautiful. But, we have had an ‘Image Problem’ – the convoluted politics of past decades which engendered the Foday Sankoh-led rebel war between 1991 and 2002: and its signature of amputated stumps of our war victims etched in the global consciousness. Here is where Neyorny’s alluring beauty will help to cleanse Sierra Leone’s war-besmirched image. We have to have in mind that there must be concurrence between what Goodwill Ambassadors like Neyorny tell the world about us and what we really are.

Neyorny cannot go out there telling the world about our idyllic beaches, and when visitors come to the beach in the Lumley Beach area that has most of the best hotels they are greeted by zinc shacks and slums and pot-holed roads leading to this beach front.

Neyorny cannot convince the world that we are the friendliness people on earth, most religiously tolerant, when we have a charged political atmosphere and a highly polarized political space that gives the impression that civil war will be looming in the horizon.

President Koroma’s Agenda for Change has to include ‘Lessons for Beauty’. This includes the banality of teaching our youth, especially our female youth, the necessity of vigorous exercises on a daily basis. Fifty five year old Oswald Hanciles, whose body has the flexibility of a 35 year old, teaches Hatha Yoga exercises to youth in Youth Arise!!!, one of the three ideological pillars of the group. He can offer you lessons. What saddens me is to see too many of our teenage girls with skin-tight blouses and protruding stomachs. Look!!: running, jumping, swimming…; martial arts; sports generally…must be fixed items in our school syllabuses. In neighbourhoods, in cities and villages, we must have regular sports tournaments. Beauty of a people like ours who are predominantly youth and children can only be enhanced with physically active people. Our youth and children must be stimulated to on a ‘Beauty Crusade’ – making manure; planting flowers; cleaning the streets; singing beautiful songs. Bringing out the real beauty of Sierra Leone will mean the ability of the governing elite to see beyond the superficiality of physical beauty, and expanding their intellects to see the interconnectedness of seemingly discordant variables – like the obligation of paying taxes to the National Revenue Authority (NRA) and political stability and economic growth; like environmental awareness, making manure planting trees and the religious fervor found in especially evangelical churches; like the APC-SLPP having regular meals and monthly beauty pageants that would include Beauty of the Month and Handsome Youth of the Month. That is beauty!!! Sustainable Beauty for Sierra Leone!

SOURCE: www.sierraexpressmedia.com
Editorial Message
This site contains materials from other clearly stated media sources for the purpose of discussion stimulation and content enrichment among our members only.
whatsonsanya.com does not necessarily endorse their views or the accuracy of their content. For copyright infringement issues please contact editor@whatsonsanya.com