Tshuma, however, is currently in Ghana where she is attending that country’s premier beauty contest today.

According to Zimbabwe Tourism Authority (ZTA) spokesperson Sugar Chagonda, the reigning beauty queen’s preparations for the Miss World contest were at an advanced stage.

Tshuma was accompanied to Ghana by Miss Tourism Zimbabwe chaperone Gladys Dongo and the two are expected back in Zimbabwe on Tuesday. She will take a three-day break before travelling to China. 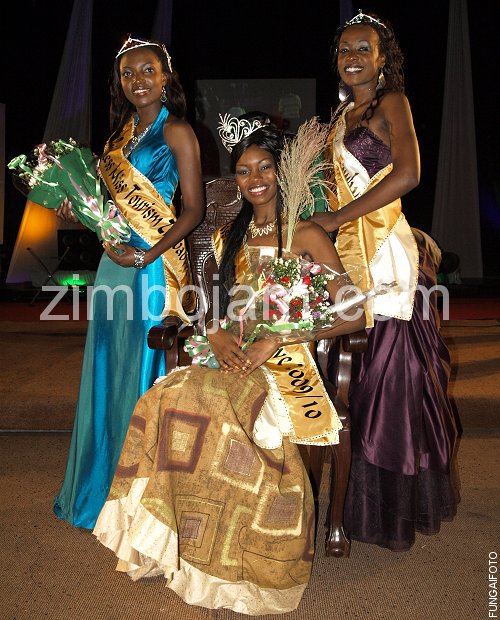 Seated is the queen, Samantha Tsuma. To the left is First Princess Chido Mashaya and to the right, Second Princess Tafadzwa Mugambizi.
In a statement, the global pageant’s organisers said the contestants were expected in Beijing on October 1 ahead of the finals scheduled for October 30 in the City of Sanya, during which reigning Miss World Kaiane Aldorino from Gibraltar would hand over the crown to her successor.

Miss World chairperson Julia Morley said: “We are delighted to be returning to China for Miss World 2010.

“Miss World has a special relationship with Sanya and there is no better place to begin our 60th-year celebrations”.

Contestants from over 120 countries are expected to compete in the pageant, the longest-running event of its kind.

Launched in 1951, the Miss World beauty pageant has become the world’s most watched annual event, with a worldwide viewing audience of over 1 billion.

“Miss World is not only a celebration of beauty but is a celebration of fashion, talent and culture as contestants will tour the host country supporting charitable causes, participating in spectacular events and visiting the local attractions,” said Chagonda.

He said fireworks would be set off throughout China, kick-starting a week of national holidays, and Beijing would, of course, be the focal point of the celebrations.

Meanwhile, Miss Tourism Zimbabwe second princess Tafadzwa Mugazambi, who was involved in a car accident on Tuesday together with ZTA chief executive Karikoga Kaseke, is reportedly in a stable condition.

The accident occurred along the Harare-Chinhoyi Road.

SOURCE: www.newsday.co.zw
Editorial Message
This site contains materials from other clearly stated media sources for the purpose of discussion stimulation and content enrichment among our members only.
whatsonsanya.com does not necessarily endorse their views or the accuracy of their content. For copyright infringement issues please contact editor@whatsonsanya.com

Next news: Hainan Airlines to open 3rd African route to Cairo on Nov. 5