Sadichha Shrestha to represent Nepal in Miss World 2010 in Sanya 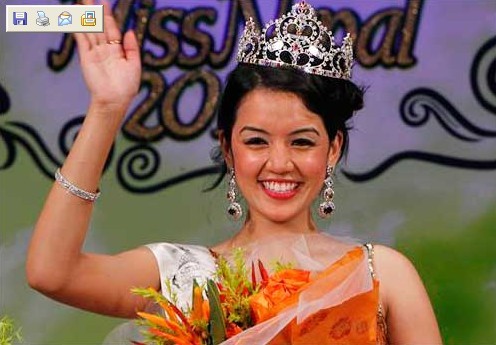 Sadikshya Shrestha, 19, waves to the crowd after being crowned Miss Nepal in Kathmandu, Nepal. She will represent her country in the Miss World 2010 pageant.
KATHMANDU: She came, she gave the answer that convinced the judges, and 19-year-old Sadichha Shrestha beat 17 other contestants to be crowned Dabur Special Hidden Treasure Miss Nepal 2010 on September 1 at the Army Officers’ Club.

The one question that was put to all top five finalists was — in which three sectors would they invest for a more responsible youth in Nepal?

In the three minutes given them to pen down their answers, Shrestha listed her three areas as — industries to provide Nepali youth a platform to show their talent, science and technology as she would love to see world-class scientists come out of Nepal, and grooming as this would help them present themselves better just as the 18 contestants in the pageant.

Sahana Bajracharya was the first runner-up, while Sanyukta Timisina was the second runner-up.

Shrestha won a cash prize of Rs 50,000 and a QQ3 Chery car. Along with the title, she has also become the brand ambassador of Nepal Tourism Year 2011 and World Wildlife Fund Nepal’s conservation ambassador.

Shrestha will be representing Nepal in the Miss World pageant to be held in Sanya, China in December.

Bajracharya, who won a cash prize of Rs 35,000 and a Mahindra Rodeo scooter, will represent Nepal in the Miss Earth pageant in Ho Chi Minh City, Vietnam.

The pageant began with a wish for peace in the country and 18 beautiful contestants clad in green gowns adorning the stage. The auditorium overflowed with an enthusiastic crowd already cheering for their favourite contestants.

of the pageant, with a panel of 10 other judges from

Three rounds decided the fate of the 18 contestants. Self introduction was their first ticket to enter the second round. Ten out of the 18 made it to the next level, a step closer to realising their dream.

To ease the growing tension, two awesome dance performances rocked the stage with their contemporary jazz and hiphop moves.

Ajita Singh, Sadichha Shrestha, Sahana Bajracharya, Samriddhi Rai and Sanyukta Timsina were the top five that made it to the final round.

www.thehimalayantimes.com
Editorial Message
This site contains materials from other clearly stated media sources for the purpose of discussion stimulation and content enrichment among our members only.
whatsonsanya.com does not necessarily endorse their views or the accuracy of their content. For copyright infringement issues please contact editor@whatsonsanya.com