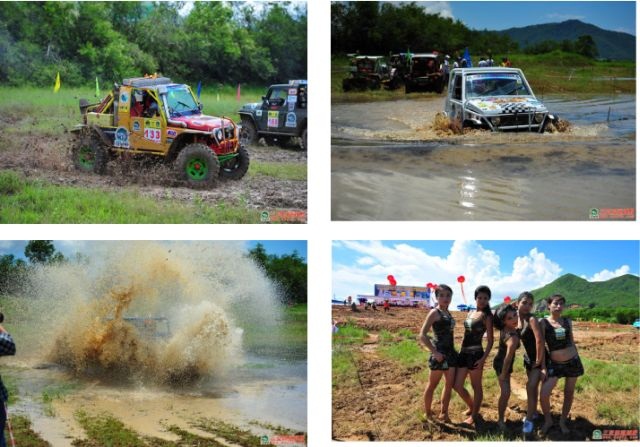 After the end of the Prologue SS on 19 Aug 2010, the forest route has begun and then there will not be any news until 24 Aug when everyone′s back again in Sanya city.

From 14 to 16 Aug and right on the eve of the event (17 Aug) worried faces were everywhere. The Prologue SS venue was drenched wet, soggy and some places flooded with water, more drainage work had to be done with two excavators to clear the water bogged grounds. Mud and more mud everywhere you turn. On scrutineering, the checking of the 4x4s had to be stopped temperorary due to heavy downpour, wind and thunder. Everyone was wondering how the following day would be like.

18 Aug was a bright sunny day, ideal for all the preparations set up for the opening ceremony in the city centre. The Secretary General of the Sanya Govt, the Sports Bureau and other dignitires were on hand to set up this 2nd edition of CIRFC.

It was a Big Bang opening indeed at the city square with an all−lady drummers square, cannons, big red baloons and models to welcome the convoy of 4x4s from participants and media from more than 20 countries. As promised, this second edition was a bigger affair than last year to the delight of everyone. The hot sunny day was a blessing after days of gloomy skies.

When the convoy reached the Prologue SS site, rain again greeted them but only for half an hour. After that, the sun again dominated the rest of the day. But what a sturggle it turned out to be, due to the soggy, watery and boggy grounds. The organizers had to make the best out of a worse situation here. 3 excavators were used in the end for recovery purpose but even then, the going was tough either way you turn – forward or backward. But this is what off-road is all about, the unpredictable ground condotions which the 4×4 teams are used to.

Even for the battle proven teams of RFC, they had to struggle too in the 6 SS. Naturally not all the SS were finished on time, so the rest will be played out again on 19 Aug as scheduled. The last SS closed at 7pm – it was a tough day indeed for eveyone. More action to come in the following days in the campsites from 19 to 23 Aug.