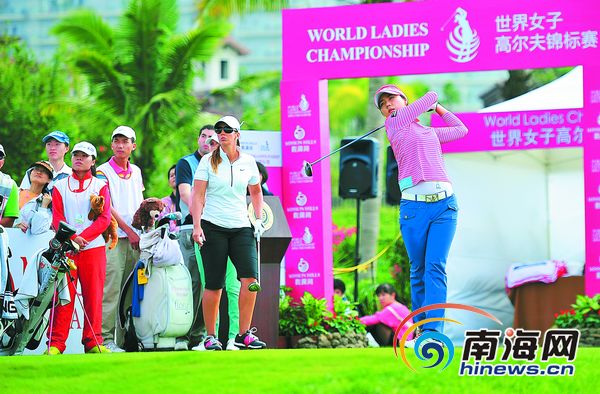 Mission Hills announced that the second edition of the World Ladies Championship (WLC) will return to Mission Hills Haikou on Hainan Island in China from 7 to 10 March 2013 and will be played on the highly acclaimed Sandbelt Trails course.
With defending Champion and World No. 5 (Rolex Official World Rankings, 14 Jan ‘13) Shanshan Feng confirmed to defend her title, the Ladies European Tour (LET) and China LPGA Tour sanctioned event will boast a field of 108 players from both tours as well as players from the LPGA tours of the U.S., Korea and Japan.
Other leading international players to confirm their participation in the US$ 600,000 prize money event, which will award Women’s World Golf Rankings points, include World No.4 Inbee Park from Korea, South African Lee-Anne Pace, Anne-Lise Caudal from France and Ha-Neul Kim, also from South Korea.
The four day tournament will once again feature a unique 3-in-1 format consisting of an Individual Professional Competition played over 72-holes of individual stroke-play; a 72 hole Professional Team Competition in which the scores of the top two players from 18 countries represented will be combined to determine the winning team, with China as host nation fielding two teams; and a 72-hole stroke-play Individual Amateur Competition.
Defending champion and Major winner Shanshan Feng commented, “I’m really excited to come back to Mission Hills and defend my title. I’ve got great memories from last year’s event which marked my first tournament win in China as a professional and set me up well for the rest of the year so I’ll be doing my very best to make it two from two.”
Tenniel Chu, the Vice Chairman of Mission Hills Group added, “Last year’s inaugural tournament was a great success and gives us a good platform to build from. We’ve introduced a number of changes to this year’s tournament and we look forward to welcoming the ladies to Mission Hills and to another great week of golf.”
Ivan Peter Khodabakhsh, Chief Executive Officer of the Ladies European Tour, added, “We’re delighted that the tour will be returning to Mission Hills again in March. The venue is first class as are the facilities and course. We look forward to working with Mission Hills to build on the success of last year’s event and establish this tournament as one of the key events on the LET calendar for years to come.”

Visitors considering a trip to tropical Hainan Island will not only be able to witness the first class golfing spectacle on offer but also have the opportunity to play the resorts nine other courses or indulge in some rest and relaxation in what is officially accredited the “World’s Largest Spa Resort” by Guinness World Records.

For more information, please visit wlc.missionhillschina.com.
About Mission Hills Group
Mission Hills Group (www.missionhillschina.com), owner and operator of Mission Hills in the heart of the Pearl River Delta and the tropical island of Haikou, is the pioneer in China’s fledgling hospitality, sports and leisure industry.
Mission Hills, recognized as the leading golf brand in the world and synonymous with high-end, luxurious residences of rare and exquisite design, has created three world class leisure and wellness resort destinations. It has hosted more than 100 international tournaments. Mission Hills has also been accredited the “World’s Largest Golf Club” by the Guinness World Records.
Mission Hills’ properties sprawl over 40 sq.km. They include 22 championship courses designed by renowned players and architects from five continents, five-star resorts, award-winning spas and volcanic mineral springs, an international convention center, golf academies and Asia’s largest tennis facility. Mission Hills is also the official training headquarters of China’s Tennis and Golf Associations. In 2013, Mission Hills will open a metropolitan leisure complex-Mission Hills Centreville combining vacation, residence, shopping, fine dining, exhibition and business.
Mission Hills  Haikou
Mission Hills Haikou lies in the volcanic region of exotic Hainan Island, China. Nestled amid lush, green gardens, it features 10 acclaimed tournament courses by Schmidt-Curley Design, each one incorporating the native lava rock formations. Other resort offerings include 518 elegantly designed guest rooms and suites, 29 elegant spa villas, a three-story clubhouse, China’s first Hank Haney Golf Academy, state-of-the-art meeting facilities, 12 world-class restaurants, a fully-equipped sports and recreation center, Hainan’s only aquatic theme park, therapeutic volcanic mineral springs showcasing centuries-old bathing philosophies from five continents, a grandiose bamboo and volcanic rock constructed spa oasis, shopping arcade and many other facilities. Mission Hills Haikou has also been accredited the “World’s Largest Spa Resort” by the Guinness World Records.
Construction has begun on a low-carbon-footprint town center. It will be a hub for business, leisure, wellness, entertainment and cultural exchanges. Highlights include Mission Hills  Lan Kwai Fong  Haikou, a joint project with Hong Kong's Lan Kwai Fong (LKF) Group. It boasts 240,000sqm of shopping, entertainment, cultural and dining attractions. Several hotels will also be featured, among them Marriott International's Ritz-Carlton and Renaissance brands.
Mission Hills Haikou’s Blackstone Course hosted the World Celebrity Pro Am in 2010 and 2012, a ground-breaking celebrity pro-am golf tournament for Asia, and the 56th World Cup of Golf in November 2011. A magnificent addition to Hainan’s tropical island paradise, Mission Hills Hainan is poised to become the island’s premier sanctuary, attracting visitors from around the globe.
Getting There: Mission Hills Hainan is 15 minutes from Haikou Meilan International Airport (HAK). Flights from major cities throughout Asia — including Beijing, Guangzhou, Hong Kong, Shanghai and Singapore — to Haikou are available.
About the Ladies European Tour
The Ladies European Tour (LET) is the governing body of women's professional golf in Europe. Its objectives are to promote world-wide interest in the game of golf, to maintain high standards in the promotion, development and conduct of ladies' professional golf activities, to provide opportunities in tournament play and golf promotion for lady golf professionals, to co-operate with organisations engaged in golf promotion objectives are compatible with those of the Ladies European Tour and to protect and further the mutual interest of the Tour and its Members.
Founded in January 1978 with its first series of golf tournaments played in 1979, the LET is now the world’s most internationally diverse women’s golf tour with over 300 professional golfers representing 34 different countries worldwide.
In 2013, the LET schedule features a minimum of 23 tournaments in 21 different countries over five continents, broadcast in 240 million homes in 80 countries globally. For further information please visit the official website www.ladieseuropeantour.com, find us on Facebook, YouTube or Twitter @LETGolf.
About China LPGA Tour Introduction

The China LPGA Tour is the only ladies professional golf tour in the country that is officially sanctioned by the China Golf Association and Multi-Ball Games Administrative Center of the General Administration of Sport.
With a mandate to provide a platform that will develop Chinese female players for careers as professional golfers, in addition to developing players for China’s Olympic team, the strategy of the China LPGA Tour has been developed over the past three years and is now successfully established in the global golf marketplace.
In addition to cooperating extensively with other international golf organizations, the Tour has gone from strength to strength with each passing year and is now recognized as one of the world’s fastest growing circuits.
Since its December 2008 establishment, the China LPGA Tour has developed quickly. In 2009, its inaugural season, six tournaments were held. This was followed by eight events in 2010, and 10 events the following year.
The China Ladies Open, the Tour’s flagship event with a US$250,000 prize purse, has also quickly developed into a tournament with a reputation as a cradle of future champions. Past winners of the tournament, a co-sponsored event with the Korea LPGA Tour, have gone on to star on tours in the U.S. and Europe, capturing Major championships in the process. At the same time, Chinese players developed on the China LPGA Tour have made great progress both at home and abroad.
Feng Shanshan and Ye Liying, in particular, have successfully made the transition to playing on tours overseas. Other Chinese players have made breakthroughs at the Asian Games and the World University Games, both of which are closely related to the development of the China LPGA Tour. With such success, the Tour is meeting its goal of developing top Chinese golf talent.
With its mission to promote the development of ladies golf in the country, the China LPGA Tour aims to organize more than 20 events annually before 2016 in developing future stars and helping China achieve a medal breakthrough at future Olympic Games.
SOURCE: golfclubbusiness.com
Editorial Message
This site contains materials from other clearly stated media sources for the purpose of discussion stimulation and content enrichment among our members only.

Next news: Haikou to hold 2013 World Ladies Championship on Mar 7-10