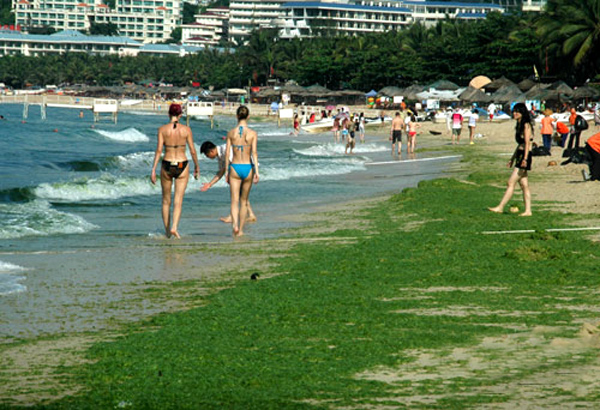 Beachgoers walk on a "green carpet" of algae on a Sanya beach on June 8, 2010.
Layers of green algae recently appeared along scenic Dadonghai beach.
A carpet of green algae has invaded one of the main beaches at the Hainan Island resort of Sanya, alarming tourists, Chinanews.com reported.
June 8 was World Ocean Day. But Dadonghai, one of Hainan Island’s most popular beaches, was covered with a "green carpet" of green algae. The sea near the beach had also turned green.

An expert with the Sanya Environmental Monitoring Station told Chinanews.com.cn that a similar event happened in 2004. He said it is a natural marine phenomenon and would not have any negative effect on the ocean environment or people.

No tourists were venturing into the water when Chinanews reporters visited the beach. They were all standing watching sanitation workers clear the algae. The workers said the algae had appeared on the beach a few days before and they were currently removing two truckloads a day.

The expert from Sanya Environmental Monitoring Station said the algae would disappear naturally when the weather and conditions in the ocean changed.

He showed Chinanews a 2004 report which stated that rising sea temperatures would kill off the algae, but that this would mean an increase of some types of bacteria that would have to be carefully monitored.

The report also suggested the algae have considerable nutritive and health care value and should be carefully studied.

www.china.org.cn
Editorial Message
This site contains materials from other clearly stated media sources for the purpose of discussion stimulation and content enrichment among our members only.
whatsonsanya.com does not necessarily endorse their views or the accuracy of their content. For copyright infringement issues please contact editor@whatsonsanya.com