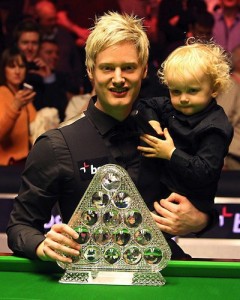 Neil Robertson and his baby boy, after winning the 2012 Masters.
Photo: Sean Dempsey/AP

John Higginsa’ astonishing victory from Shanghai Masters. Photo: CFP
It must be some kind of tradition to look back at the recently ended year and review what happened and what did not happen, but hopefully will become a reality next year. So it comes as no surprise that The Upcoming has decided to take you back on a very snooker-ish journey through the main events that happened during 2012 in the sport.

It must be said that 2012 was definitely a brilliant year for the colourful cue sport. We had more tournaments than ever before and with them, more surprises.

We had dramas, scandals and celebrations but on a general note, it was one of snooker’s most productive and rich years of its existence.

With the 2011/2012 season not over yet, January began with the most prestigious and notorious invitational events on the snooker calendar – the Masters.

Held at Alexandra Palace to give the event more grandeur and also in order to do justice to its name, the tournament was won by one over-the-moon Neil Robertson with a brilliant 10-6 victory against Shaun Murphy.

The image of Robertson and his curly-blond-haired baby boy accompanying his daddy on the green baize was probably one of the most looked at photos of the year, since snooker players are known for keeping their personal life away from the world’s eyes.

February brought the first two main-ranking events of the year into the spotlight: the German Masters and the Welsh Open.

The first one saw an-out-of-this-world Ronnie O’Sullivan fighting to regain the position at the top of the tree that he so easily held for years and managing to do it in a match against Stephen Maguire, which ended in a 9-7 final result.

It was during this tournament that O’Sullivan revealed that he’s been struggling with glandular fever over the years, a cruel disease that has interfered with his snooker activity more than once.

The Welsh Open trophy got a Chinese name written on it, Ding Junhui beating Mark Selby 9-6, in a performance that put an end to a not-so-great-season of snooker for Ding and bring hope to his fans from all over the world.

The brand new World Open tournament staged in Haikou, China in March gave the Northern Irishman Mark Allen his first ranking title after a battle of cues that had one of the most incredible final scorelines of all time, 10-1 with Stephen Lee.

However, Lee went on just a few days after that to win the Players Tour Championship Finals by whitewashing Neil Robertson 4-0.

Staying in The Far East, The China Open tournament marked the revival of Peter Ebdon, whose Phoenix wings raised him to win a thrilling, yet very long, final in a 10-9 result against Stephen Maguire.

At the beginning of May, the World Championship crown was carefully put on Ronnie O’Sullivan’s head as the Essex-man beat Ali Carter 18-11 to grab his fourth world title and he then promptly announced that he would be going on a six-month holiday though stating he was not giving up on snooker just yet.

Probably not the best end for a season, but clearly a very interesting one.

The 2012/2013 season made its debut with its traditional qualifying rounds, but by June the boys were ready to dust their cues and get back to work.

The Wuxi Classic event was turned into a ranking one, this bringing a lot of excitement for the players, especially for Ricky Walden who since 2008 (when he beat O’Sullivan to lift the Shanghai Masters trophy) lacked in the silverware department.

Walden beat Stuart Bingham 10-4 to kickstart what soon proved to be quite a remarkable season of snooker.

The second edition of The Australian Open brought Barry Hawkins back into the spotlight, after the Englishman won at the beginning of the year in a non-traditional snooker event: the Shoot-Out tournament in Blackpool. This time though the prize being a 9-3 victory over Peter Ebdon and a well-deserved maiden trophy.

In September a fire-cracking match took place in China, as the Shanghai Masters’ final featured the names of John Higgins and Judd Trump.

As history has shown, these two have a bit of a rivalry going on; the 2011 World Championship final being one of those moments, and we can surely now add this event.

Higgins managed to come back from a 7-2 deficit in order to beat Trump 10-9 and put an end to a horrendous last season, when his name was not on the winners’ list.

Interestingly enough, the Scotsman continued his winnings with the UK PTC 4 Event, when he beat Trump again 4-2, but the youngster was sure to return the favour during the following competition (the European PTC Event 4), when he beat Higgins 4-0.

The Premier League or the “tik-tok snooker tournament” was not to see its king, Ronnie O’Sullivan taking part in it, as the Englishman refused to sign the new players’ contract, hence not entering into any tournaments.

As if this wasn’t enough, after one of the round-robin matches held between John Higgins and Stephen Lee, the World Professional Billiards and Snooker Association ( WPBSA ) started to investigate Lee on suspicious betting patterns. A month later, the player is suspended until a verdict can be reached.

On a more positive note though, the tournament was won by Stuart Bingham, the same player who mastered the Asian PTC series and won two out of three events this year.

November brought the sad news of Ronnie O’Sullivan’s withdrawal from this snooker season, the player invoking “personal matters”. This also meant that he wouldn’t be able to defend his world title.

The last main event of 2012 marked Mark Selby’s return on the podium; the Leicester player winning the UK Championship 10-6 by playing an old friend, Shaun Murphy. This was in April.

So drawing the line, it’s easy to conclude that we had a very busy 2012 and we can safely assume that 2013 will bring even more tournaments; changes; dramas; victories and defeats, but more importantly, that magical thrill of seeing those colourful balls rolling down the green baize, sometimes slotting into a pocket and sometimes missing it by an inch.

SOURCE: theupcoming.co.uk
Editorial Message
This site contains materials from other clearly stated media sources for the purpose of discussion stimulation and content enrichment among our members only.
whatsonsanya.com does not necessarily endorse their views or the accuracy of their content. For copyright infringement issues please contact editor@whatsonsanya.com

Next news: Year of Marine Tourism 2013 makes a splash in Sanya