Records document decline of rare Hainan gibbon over past 400 yrs 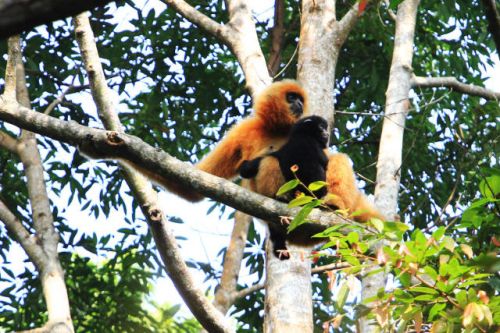 A group of researchers have used historical records to trace the decline of the Hainan gibbon, the world's rarest primate, over the past 400 years.

Today, just 26 to 28 Hainan gibbons are left, and they can only be spotted within a 20-square-kilometer area of forest in China's Hainan Island. Government records dating back to the 17th century, however, have revealed that the primates were once widespread across China, commonly sighted in at least 20 provinces. Their population took a dive around 150 years ago, in correlation with the rise of the human population.

Researchers from the Institute of Zoology, Zoological Society of London and the University of Queensland in Australia recently described what they learned about the disappearance of the creature in the journal Proceedings of the Royal Society B.

"We looked at the pattern of disappearance of gibbons through time and how that varied from place to place and the different environmental conditions and human pressures that were also present in these places," Dr. Sam Turvey, from the Zoological Society of London, was quoted as saying.

"We see a really steep increase in population decline and real population collapse across China about 100-150 years ago," he added. "And this correlates with demographic expansion in China towards the end of the Imperial era and through the 20th Century, and the massive increase in deforestation and human population growth through the time of the Chinese Republic and the establishment of the communist party."

On the plus side, the research team believes that their findings will help with conservation efforts to prevent the Hainan gibbon from disappearing completely.

"With the right conservation management, it is still possible to conserve and recover the Hainan gibbon population,” Dr. Turvey told Nature News last year. “But given the current highly perilous state of the species, we cannot afford to wait any longer before initiating a more proactive and coordinated recovery program.”