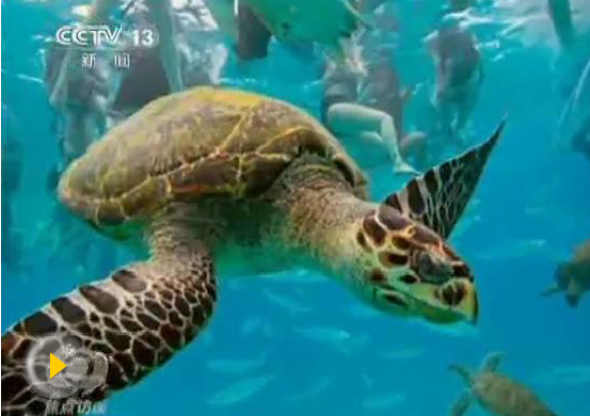 Highly endangered hawksbill sea turtles are being slaughtered to fuel the illegal trade in Hainan, and the local government is taking no effective action against it, China Central Television (CCTV) has reported.

China lists hawksbills as second-level protected animals and outlaws the hunting and buying of related products. Yet hawksbills continue to be killed in Tanmen township, Qionghai city, Hainan province.

Hawksbills represent longevity and are one of the four heavenly animals in traditional Chinese legends. Because their shells are semi-transparent and have striking colors, hawksbill products are extremely popular and highly sought after in thousands of stores in Tanmen.

"You know how they are killed? I scald them to death in boiling water. Otherwise they don’t come out as shiny," said the shop owner.

It is unclear why the local government does so little to fight the rampant hawksbill trade in the area. Fishing authorities pass the accountability to business authorities, which then pass it to the township government, whose staff say, "We are aware of the situation and will inform our leaders."

The hawksbill trade is thriving in Tanmen, despite animal protection billboards and posters all over the streets.