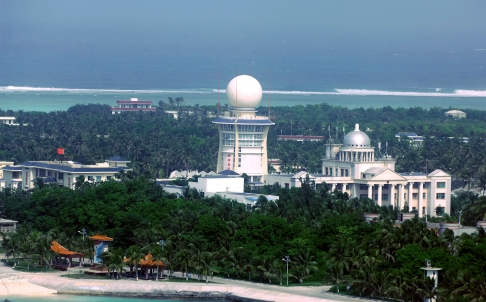 An aerial view of Sansha on Woody Island in the Paracels chain. Photo: AFP
China is to base a 5,000-tonne marine patrol ship at disputed islands in the South China Sea, a government newspaper said yesterday, a move that is likely to fuel territorial disputes with its Asian neighbours.

The China Ocean News, which is published by the State Oceanic Administration, said the vessel would be based at the small town of Sansha on one of the Paracel Islands and that a regular patrol system would be set up from the base gradually.

Sansha was established two years ago to administer areas of the South China Sea that are also claimed by Vietnam and the Philippines.

The decision to base the patrol boat in the area was part of an agreement between Sansha and the maritime authorities in Hainan , the report said.

China’s biggest patrol vessel is a 4,000-tonne ship, suggesting it will build a bigger vessel to carry out the patrols from Sansha.

Meanwhile, the China State Shipbuilding Corporation, one of the country’s two shipbuilding giants, said yesterday it was to build a 10,000-tonne marine surveillance ship.

It will be the world’s biggest marine patrol ship, bigger than the Japanese coastguard’s 7,000-tonne Shikishima PLH 31 vessel.

A mainland maritime expert denied the move to build bigger patrol vessels was aimed at challenging the authority of neighbouring countries involved in territorial disputes with China.

"What China has done is to defend the country’s rights and interests because it needs more bigger ships to oversee maritime security in the huge area covered by the South China Sea," said Professor Wang Hanling , a maritime expert at the Chinese Academy of Social Sciences.

"The establishment of a patrol system and other improvement works at Sansha reflects that Beijing is trying to narrow the disadvantage it has in maritime development, which was neglected over the past six decades."

Beijing has said it has 27 patrol ships, all of at least 1,000 tonnes, patrolling disputed waters in the East China Sea and the South China Sea, with some equipped with light weapons and helicopters. Another 36 larger vessels have been under construction since 2012, according to a Xinhua report.

The State Oceanic Administration has increased surveillance around the Diaoyu islands since the Japanese government, which calls them the Senkaku islands, bought some of the disputed territory two years ago.

Among the vessels patrolling in the area are China’s largest patrol ship, the Haijian 50; its sister ship, Haijian 83; and Haijian 66, the mainland’s fastest surveillance vessel.

SOURCE: scmp.com
Editorial Message
This site contains materials from other clearly stated media sources for the purpose of discussion stimulation and content enrichment among our members only.
whatsonsanya.com does not necessarily endorse their views or the accuracy of their content. For copyright infringement issues please contact editor@whatsonsanya.com.