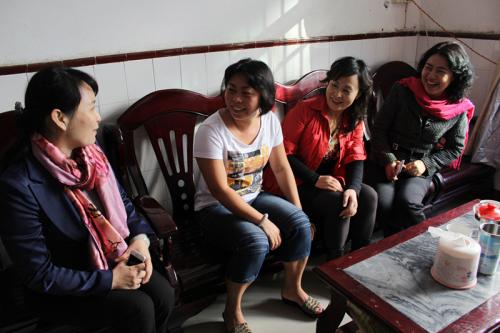 Yang and the delegation visited the families of Zhao Linping and Lu Songji, and said family harmony contributes a great deal to social progress.

Zhao is the eldest sister of a family who has taken responsibility for supporting the family after her parents passed away. Lu’s husband died in an accident years ago, after which she chose to raise a child and her parents-in-law by herself. Their stories moved many local citizens and their families were selected as the ‘most beautiful families’ during a campaign aiming to promote the cultivation of civilization in families civilization launched by the Hainan Women’s Federation.

During the visits, Zhao said that families were the base for advancing social civilization and were where women have the greatest impact. Virtues such as respect for senior citizens, taking care of children, thrift and altruism are the core of a civilized family culture and were vital in maintaining society stability.

In order to implement the key points of the 18th National Congress of the Communist Party of China (CPC) and Third Plenary Session of the 18th CPC Central Committee, the Hainan Women’s Federation launched a campaign to ‘search for the most beautiful families’ three months ago.

Stories of 26 of the ‘most beautiful families’ were reported by local media, and the federation plans to promote the stories of the national ‘Five-good Civilized Families.’

Since the 1950s, women’s federations across China have conducted the competition known as ‘Five-good Families.’ In 1996, the All-China Women’s Federation (ACWF), with the Publicity Department of the Central Committee of the CPC and 18 other ministries and committees launched the ‘Five-good Civilized Families’ program.

Objectives of the program include improving the qualities of family members, raising their living standards and promoting a culture of civilization of urban and rural areas. It also actively advocates respect for the elderly and care for the young, equality between men and women, industrious and thrifty management, harmonious family life and neighborly unity.