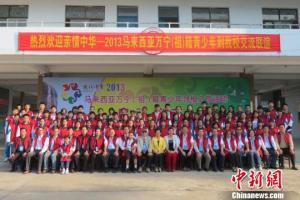 The launch of the 2013 Malaysian-Wanning Teenagers’ Roots Searching Ceremony was held at the Wanning Middle School on December 8, 2013.

Through the visit, the teenagers will learn more about Chinese culture and the development of Hainan, and trace where their ancestors are from. It will also provide them with an opportunity to communicate with local youth.

President of the Malaysia (Hainan) Wanning Association Datuk Wu Shi Cai will lead the group on their visit.

He Yunxia, chairperson of the Hainan Returned Overseas Chinese Federation, says that over 3 million people with roots in Hainan now live in 50 foreign countries and regions. They have founded nearly 400 Hainanese communities and set up Chinese schools all over the world.

"They have organized all kinds of exchanges to trace their roots and to promote Chinese culture," He said.

The teenagers toured the Wanning Middle School and watched performances given by the school students.

Aside from visiting scenic spots and historic sites in Hainan, they will also learn about the historical culture of Wanning, study the Hainan dialect and join in a series of exchange activities with the local students.

Returned overseas Chinese have been driving the economic development of Wanning, with the Xinglong Overseas Chinese Tourism Economic Zone having seen over 13,000 returned overseas Chinese from 21 countries and regions, including Thailand, Malaysia and Vietnam, settling there since it was established in 1951. At various stages in time it has been a collective farm village, state farm, people’s commune, and production and construction corps.

The flourishing tourism industry in Hainan in recent years has also benefited the development of the Xinglong Overseas Chinese Farm, with its annual value having reached more than 100 million yuan (US$ 16.3 million) recently.

The ACFROC works independently. Its main objectives are to unite returned overseas Chinese and their families and encourage them to participate in China’s modernization construction, to improve economic cooperation and technological communication with overseas Chinese, to participate in the country’s political, economic, cultural and social development, and promote the peaceful reunification of the motherland.