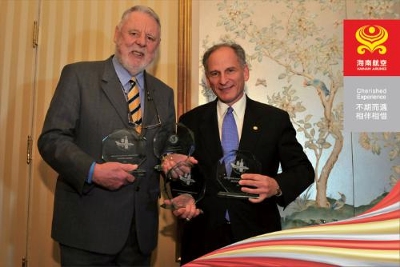 Hainan Airlines officially entered the North American market in 2008, and currently operates direct routes from Beijing to Toronto, Seattle and Chicago, and will launch non-stop service to Boston next year. Mr. Chusid commented, "Hainan Airlines has been named the ‘Best Airline in China’ twice by Premier Traveler and three times by Global Traveler. I believe that more members of the flying public across North America will come to know Hainan Airlines, and as they learn more, come to select Hainan Airlines as their preferred carrier for connections between China and the US or other North American destinations."

Since inception in 1993, Hainan Airlines has proactively and innovatively been dedicated to making passengers feel welcome and assuring them the most comfortable travel experience through high-quality services and by adopting best practices from a long tradition of Oriental hospitality.

"Cherished Experience". In recent years, with the expansion and addition of the 787 Dreamliner to the fleet, the opening of new international routes and the creation of "Beauty of the Orient" services, Hainan Airlines continually has strived to enhance all aspects of its business to create an international brand, establishing a solid reputation with outstanding customer service and global visibility and popularity.

SOURCE: prnewswire.com
Editorial Message
This site contains materials from other clearly stated media sources for the purpose of discussion stimulation and content enrichment among our members only.
whatsonsanya.com does not necessarily endorse their views or the accuracy of their content. For copyright infringement issues please contact editor@whatsonsanya.com