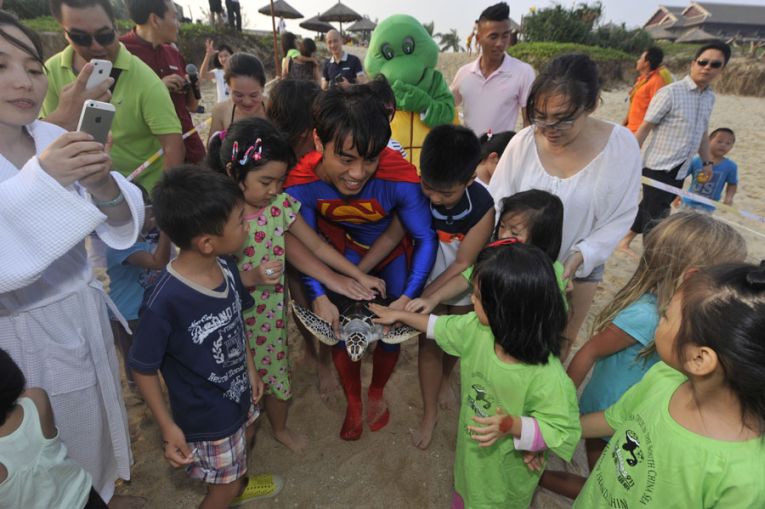 Superman flew in to help the ninja turtle swim off; Superman image; Credit: © seaturtles911
Between the plastic garbage patch floating in the Northern Pacific now twice the size of Texas—and the radioactive plume carrying debris from Fukushima toward North America, it’s safe to say that the future of Pacific marine life is in peril. Nevertheless, an optimistic crowd of tourists in Hainan, China, cheered on a rehabilitated green sea turtle, Chelonia mydas, aptly named Hope, as she swam into the Pacific to face these odds.

In dramatic contrast to previous sea turtle release events, Sea Turtles 911’s Founding Director Frederick Yeh wore a Superman suit instead of the usual volunteer T-shirt, as he guided the turtle toward the ocean. Yeh explained, “In times of impending doom, Superman brings hope to the human species, and with the sea turtle species nearing the brink of extinction, saving turtles is looking more like a job for Superman."

Joyful children followed Superman, and together, they returned Hope to the Pacific Ocean. Yeh’s transformation to the popular superhero is based upon the two-fold idea of presenting a positive role model for children to protect the environment, in addition to highlighting the significance and urgency that surrounds the rescue, release, and conservation of endangered sea turtles.

Like many of the turtles that Sea Turtles 911 rehabilitates, Hope was found floating helplessly atop the ocean’s surface after mistakenly swallowing a plastic bag for jellyfish, a favorite food for sea turtles. The added buoyancy of the plastic she ingested not only caused her to drift along the Pacific ocean’s currents to Hainan coastal waters, but also caused her digestive system to shut down.

By the time Chinese Coast Guard police found her afloat and transported her to Sea Turtles 911, she was emaciated, and near death. Yeh and other volunteers spent seven months nursing Hope back to health, after which she made a full recovery. “Hope’s miraculous recovery in China brings hope that one day the sea turtles here will make a population recovery and return to the beaches, living together with people in harmony, as they do in Hawaii where sea turtles and people share the beach peacefully, Yeh said.

With the Pacific Ocean in environmental turmoil, and teeming with poachers who sell the endangered turtles for their meat, and their shells to be made into jewelry, symbolic turtle releases to raise awareness like Hope’s have become a cornerstone for the marine conservation movement in China. As pollution and encroachment continue to deplete the remaining representatives of this ancient and gentle reptilian species, the crowd at Hope’s release witnessed Yeh’s vision of a better future for sea turtles. Where many people might have looked over the horizon and pictured a dark cloud of radioactivity and pollution, this group of tourists saw Hope.