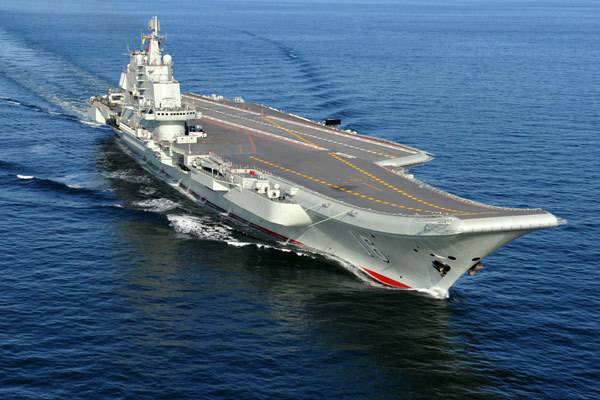 The aircraft carrier has conducted 10 sea trials since August 2011. [Photo by Li Tang / for China Daily]
China’s sole aircraft carrier left for the South China Sea on Tuesday on a mission to test its crew and technical capabilities.

The Liaoning’s voyage comes amid rising tensions between China and Japan over the Diaoyu Islands, as well as lingering territorial disputes in the South China Sea.

But a military expert said the move is aimed at testing the nation’s first carrier in open sea with large waves and fewer civilian ships.

The Liaoning left its home port Qingdao in Shandong province in the morning.

It is the first time the carrier has embarked on a cross-sea training voyage since it was commissioned into the People’s Liberation Army navy last year, Liaoning Captain Zhang Zheng said.

The vessel was escorted by two missile destroyers, the Shenyang and Shijiazhuang, and two missile frigates, the Yantai and Weifang.

Zhang said the voyage will test the carrier’s equipment.

There are several possible courses for the voyage from Qingdao to the South China Sea and it is not clear which the Liaoning will take.

Japan’s Jiji News Agency said on Tuesday that the vessel may sail close to the Diaoyu Islands or the Miyako Islands in Okinawa.

Major General Yin Zhuo, director of the Chinese Navy Information Expert Committee, said the voyage has been planned for a long time and is not targeted at any international situation.

"It is hard to find an ideal area for the mission, except for the South China Sea," he said.

"The Liaoning has been on training voyages in the Yellow Sea and East China Sea, which have shallow waters but numerous civilian ships passing by."

Yin said a voyage of at least several weeks and up to as long as two months in heavy seas is crucial for a comprehensive test of the carrier’s equipment.

The Liaoning also needs such a voyage to train its crew and to decide on an appropriate personnel deployment, he added.

"We also need to see the carrier’s fighters take off and land in various types of wind and waves for testing and training."

Meng Xiangqing, a professor at the PLA’s National Defense University, said the Liaoning and its four escort ships can be viewed as the embryo of a carrier battle group, but submarines are still needed to form a real group.

"So the mission has another important task — to test and train the coordination of the group."

He said that in a mission completed earlier this month, three J-15 fighters took off almost at the same time from three areas on the carrier’s deck, one year after the first fighter took off successfully from the Liaoning.

"The missions are getting harder and are farther out to sea, which is normal as aircraft carriers are designed for combat in such areas."

The Liaoning needs to become accustomed to different sea and weather conditions in waters off China, he added.

The vessel was refitted from an unfinished Ukraine carrier and was delivered to the navy on Sept 25, 2012. The military said it is used for training and for tests.