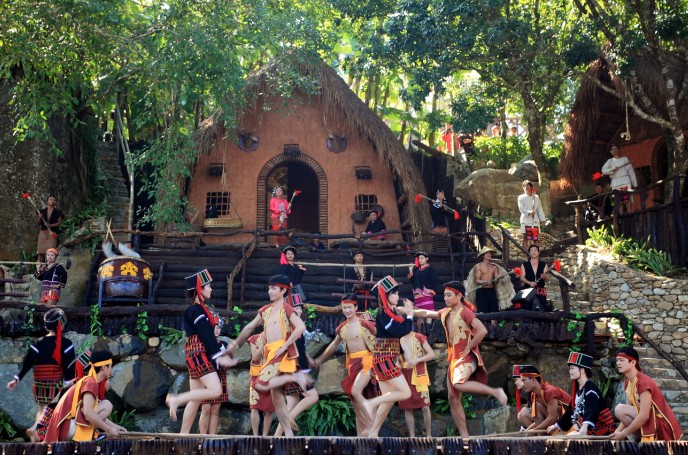 Members of the delegation watched the spectacular live Li and Miao minority performances.
In order to expand the popularity and influence of Sanya tours in Dalian and the entire Northeast China tourist market, the Sanya Tourism Development Committee invited a Dalian media delegation to pay a visit to the Binglanggu Valley in Baoting County on November 14th.

The delegation, consisting of representatives from the Dalian Tourism Association, media outlets and travel agencies in Dalian, continued their research and understanding of Li & Miao folk customs and cultures and the unique scenic features of the area, as well as the operational status of Binglanggu Valley.

During their stay in Binglanggu Valley, members of the delegation also watched the spectacular live Li and Miao minority performances, and personally experienced a series of interesting interactive live performances combining various Hainan aboriginal customs including the marriage custom of the Li people.

Mr. Wan, the general manager of the Dalian branch of China Travel Service, said that he was very impressed by the live ethnic cultural performances, which he said were a marvelous combination of the Hainan Li and Miao minority customs and cultures.