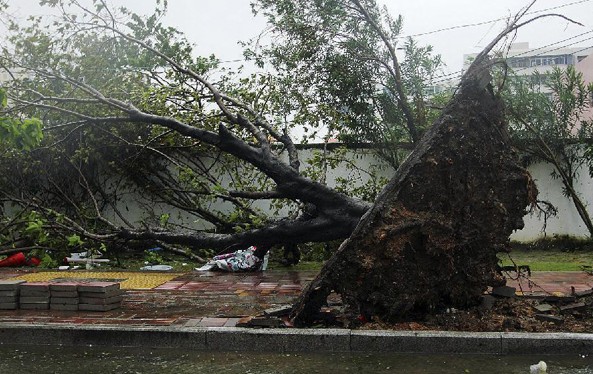 A tree is uprooted by strong wind as Typhoon Haiyan approaches Sanya City, south China’s Hainan Province, Nov. 10, 2013. Haiyan, the 30th and strongest typhoon to hit China this year, is bringing downpours and strong wind to Hainan. As of 3:00 p.m. Sunday, Haiyan had delayed 187 flights at Sanya Phoenix Airport. [Xinhua]
China announced on Sunday its highest alert for Typhoon Haiyan as six crew members of a cargo boat were reported missing.

The China Meteorological Administration hoisted the “red” signal, the highest in its four-tier warning system, as the typhoon brushed the southern island province of Hainan.

Six people were lost at sea after the mooring rope of their vessel was cut in the storm, causing the ship to drift, the official Xinhua news agency said.

The storm brought heavy rains and cancelled flights in Hainan, after devastating the Philippines as a super typhoon.

In Hainan’s Sanya city, a major tourist resort, more than 13,000 people were evacuated and over 400 boats called back to port, state media said.

More than 200 flights at Hainan’s two airports, in Sanya and Haikou, were cancelled or delayed, reports said.

The Meteorological Administration is forecasting the typhoon will move towards China’s southern region of Guangxi.

The US Navy’s Joint Typhoon Warning Centre predicts Haiyan will make landfall in Vietnam before crossing the border into China.

Vietnam has evacuated more than 600,000 people ahead of the typhoon’s expected arrival on Monday morning, authorities there said.

In the Philippines, the death toll from the typhoon that decimated entire towns could soar well over 10,000, officials warned.