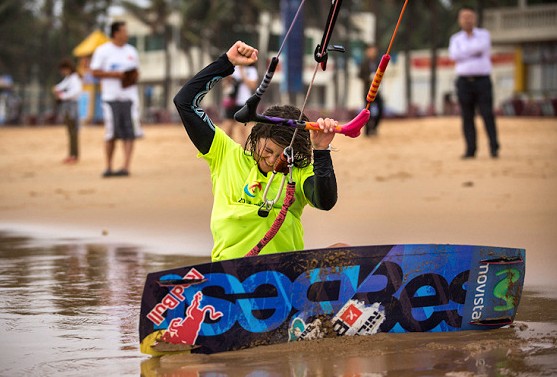 Gisela Pulido has claimed the 2013 PKRA Freestyle World Tour title, after winning the Hainan Kitesurf Festival 2013, in China.
Alex Pastor had already celebrated his maiden Freestyle trophy. Spain could make it a double party, if everything went well for Gisela Pulido, in Asia. And yes, it happened in the island of Hainan.

The battle for the final was the classic battle between Pulido and Karolina Winkowska. Their first heat was canceled due to a drop in the wind, but second one had perfect conditions.

Gisela came out firing with a 313, Blind judge, Back Mobe, S-mobe and 315, and never gave Karolina any chances of stealing the lead. The victory allowed Gisela to reconquer the world title from the Polish rider.

"This year, I really enjoyed kiting on the tour. I did not feel the pressure to win every event. I really just wanted to kite better because it is my passion and what I love to do", says Gisela Pulido.

The Spanish rider has secured her 9th world kiteboarding title. Pulido was born on the 14th January, 1994, in Premià del Mar, Spain.