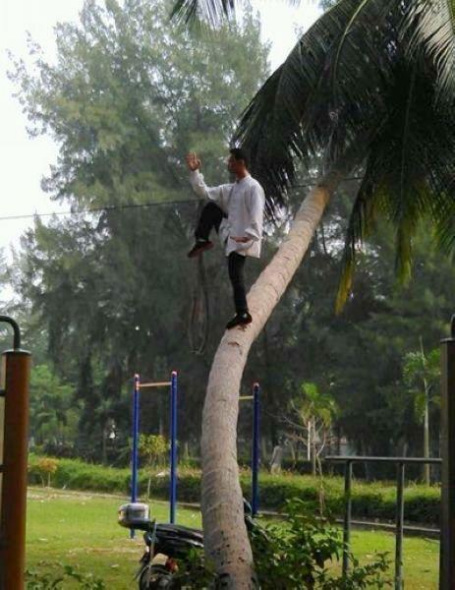 The man stands on the bending trunk of a coconut tree and strikes different kung fu gestures in each photo with composure and ease.
Photos of a martial artist balancing on a tree at a southern China university have gone viral, the Hainan-based Nanguo Metropolis Daily has said.

A netizen named "Zhujiao" posted nine pictures taken at Hainan University last Thursday. They show a man in a typical kung fu uniform standing on the bending trunk of a coconut tree, four to five meters above the ground.

The man strikes different kung fu gestures in each photo with composure and ease.

Forwarded by the official Weibo accounts of several media outlets, the post has received more than 62,000 clicks and nearly a thousand comments, many of which refer to the man as a "kung fu master."

Reporters went to Hainan University on Sunday afternoon but the martial artist didn’t appear. Many students said they had witnessed the man practicing on the tree trunk.

The university’s martial arts association said the man is surnamed Fu and around 30 years old. Although not a teacher at the university, he has many followers, the association added.