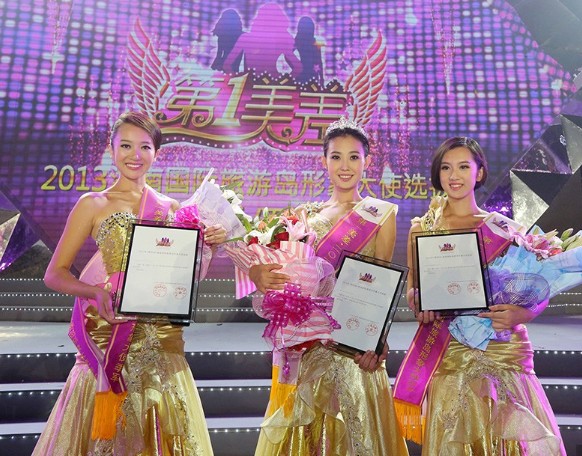 Zhao, 21, is currently studying at the Sichuan Normal University in southwestern China’s Sichuan Province. As the tourism ambassador for Hainan Island, she will be paid an annual salary of one million yuan (US$ 164,100) and during her term for the job, she will travel across the world to promote Hainan Island as a top international tourism destination.

Hainan Province was officially established in 1988 with the launch of the Hainan Special Economic Zone, which is the largest special economic zone in China.

In 2000, the province initiated a visa-upon-arrival policy for foreign tourist groups. It is available to citizens of 26 different countries, and was established in order to attract visitors.

To encourage tourism to Hainan, visitors are allowed to claim a maximum of 8,000 yuan (US$ 1312.8) in tax refunds on luxury items purchased within the province.

In December 2009, the Chinese government announced that it plans to establish Hainan as an international tourist destination by 2020. This announcement contributed to a surge in the province’s economy, with a year-on-year increase in investment of 136.9 percent in the first three months of 2010.

On April 20, 2011, a pilot duty-free program commenced with the aim of increasing luxury goods purchases. It permits domestic Chinese visitors to claim tax refunds on imported luxury items purchased within the province. The total sales of duty-free products for 2012 were 2.4 billion yuan (US$ 393.8 million) and the world’s largest duty-free shopping complex is scheduled to open in Haitang Bay in August 2014.

In the first quarter of 2012, the Hainan Provincial Tourism Development Commission reported that Hainan received 208,300 overnight visitors, 25 percent of whom came from Russia.