Fishing boats dock in Yongxing Island, Sansha city, South China’s Hainan province in 2012. (Source: China Daily/Huang Yiming)
Fisherman Lin Jian has lived on Yongxing Island for more than a decade, but today he hardly recognizes the place.
"Every day the island has a new look," the 45-year-old said.
This once-remote island, in southern Hainan province, became home to Chinas newest and smallest city — in land size and population — when Sansha was established in July last year.
Since then, it has undergone a transformation that even by Chinese standards has been astonishing; from having almost no modern conveniences, to having tap water, 24-hour electricity, paved roads, a hospital and a sewage plant — even 3G coverage.
Lin and his family will soon move into a new home in a purpose-built fishing community, while a kindergarten and primary school are set to open next year.
"Life here is no different than in an urban area, with the Internet and TV, but we have beautiful views and fresh air," said Lin Jun, the fisherman’s 19-year-old son, who returned to the island last year to help the family business.
"It’s not a remote island to me anymore," he added. "It’s a good place to relax."
Sansha comprises several island groups in the South China Sea — Xisha, which includes Yongxing, the seat of the Sansha city government, and Zhongsha and Nansha — and covers a land area of 13 square kilometers and 2.6 million sq km of maritime territory.
According to the city government, the islands were home to 833 people by the end of 2012. Officials expect that to increase, if higher authorities agree to changes to household registration rules to attract more long-term residents.
When it comes to infrastructure, Mayor of Sansha Xiao Jie, said priority has been given to projects that concern people’s livelihoods.
The first 28 projects completed in July this year, after an investment of 24 billion yuan ($3.9 billion), paid for an extended nine-berth port at Yongxing and a garbage collection and transfer system.
A new, three-story hospital, which cost 18 million yuan, means the city can meet basic health demands, while a 20 million yuan sewage treatment plant supplies Yongxing with 1,800 cubic meters of safe, non-drinking water.
Hainan province and the central government have pooled almost 80 million yuan for a badly needed seawater desalination plant, which will process 1,000 cu m a day to produce clean drinking water.
Authorities say a vessel with a capacity of 400 metric tons is also under construction in Zhanjiang, Guangdong province, and will transport food from Yongxing to other islets and collect waste, as well as possibly provide ferry services. 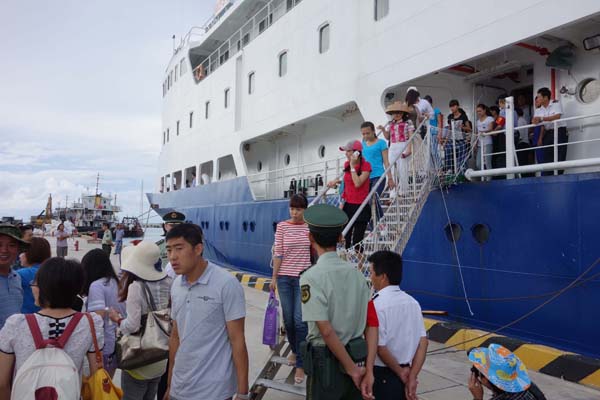 The supply ship Qiongsha No 3 takes passengers to Yongxing Island in July. Most of the visitors were to visit their family members who are soldiers stationed on the island. (Source: China Daily)

Sansha has 80 percent of China’s underwater oil and gas resources, while 30 percent of the country’s imports and exports travel through its waters, according to the Hainan Provincial Fishery Research Institute.

However, tapping its potential while protecting its fragile eco-system will be a delicate dance.

During the initial infrastructure boom, deputy mayor Zhang Jun insisted environmental protection is being put ahead of economic development.

Groundwater exploration will be suspended by 2015 to protect Yongxing Island, he said, while the city will develop solar and marine power plants to ease pollution.

Environmental monitoring and law enforcement systems will also be established to deal with illegal fishing and dumping, Zhang added.

Some companies have already stepped in to help authorities start the city on a sustainable path, too.

In April, Yingli New Energy, one of about 21 companies registered in Sansha, fitted 120 islet homes with free photovoltaic systems, each worth 5 million and able to generate nearly 70,000 kWh a year.

General manager Wang Qin said his company will design products specially for the market, which he said has huge potential.

China Southern Power Grid also promised to spend at least 300 million yuan over the next five years to turn Sansha into a model of low-carbon consumption, although the grid will only cover Yongxing and Zhaoshu islands.

To further develop in a scientific way, authorities drafted in 13 scholars in the fields of marine biology, environmental protection and land planning to help draw a roadmap for the future.

Among them was Liu Feng, a senior researcher at the National Institute for South China Sea Studies, who predicted: "Major industries in Sansha will be tourism and fisheries".

The Sansha Deepwater Farming Plan, released in February, states that by 2015 the city aims to have fish kept in about 3,000 netted cages.

Nansha Islands and the surrounding 820,000 sq km of water are a prime fishery resource, with the potential for producing an estimated 1.8 million tons of more than 20 species of fish a year, according to the Hainan Provincial Fishery Research Institute.

In the past year, fisheries in Hainan have received government approval to build deep-sea fish farms in islets and reefs in the Xisha and Nansha island groups.

However, Ji Guobiao, a researcher with the State Oceanic Administration’s Third Institute of Oceanography, urged authorities to carry out a comprehensive investigation into resources in the South China Sea to better develop the industry.

"The Sansha bio-system is very simple compared with the Chinese mainland and needs special care," he said, and warned: "Once the balance is broken, recovery may be impossible".

Authorities say they are working on a special coral reef preservation zone to protect the diverse eco-system off Zhaoshu Island, which could be finished this year.

In December, the city launched a tree-planting program on four islets and reefs to curb soil erosion, with 500 trees planted on Yagong Islet in Xisha Islands in March.

The State Council approves establishing Sansha as a prefecture-level city to administer the Xisha, Zhongsha and Nansha island groups and surrounding waters.

China officially establishes the city of Sansha on Yongxing Island, with Xiao Jie elected as its first mayor.

The city’s first infrastructure projects get underway, including a sewage disposal factory and sewage pipe network and a waste transfer station on Xisha Islands.

The Sansha government signs a strategic cooperation agreement with the China Shipbuilding Industry to help Sansha boost development of its marine industry.

The city authority issues its first environmental protection declaration, stating groundwater exploration will be suspended before 2015.

The Sansha’s city plan is submitted to the State Council for approval.

Hainan provincial government says South China Sea Satellite TV and the Sansha Daily newspaper will be established within the year to report on construction, economic development and environmental protection.

About 100 Chinese tourists embark on a four-day voyage to Xisha Islands on the Coconut Princess, the only cruise ship allowed to sail to Sansha.

The first batch of 10 ID cards and 68 residential permits are issued to Sansha residents.

Phase 1 of a port for civil use on Yongxing Island is completed. It has nine berths and cost about 340 million yuan ($56 million).

SOURCE: Xin Hua
Editorial Message
This site contains materials from other clearly stated media sources for the purpose of discussion stimulation and content enrichment among our members only.
whatsonsanya.com does not necessarily endorse their views or the accuracy of their content. For copyright infringement issues please contact editor@whatsonsanya.com

Next news: Sansha, a new tourist gem in Hainan to lure tourists