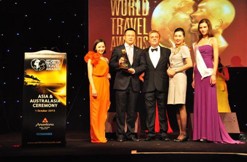 The World Travel Awards Asia & Australasia Gala Ceremony, part of the WTA’s series of gala events often referred to as "the Oscars of the travel industry", was held in Dubai on October 1. The tally of the voting by 230,000 industry judges and travelers awarded Hainan Airlines the Asia’s Leading Airline Economy Class at the 20th WTA.

Xu Fei, general manager of the cabin service department at Hainan Airlines, attended the ceremony and said, "We are very grateful for the support and trust of the judges and travelers. We will continue to provide passengers with the five-star level of service and a most comfortable and safe flight experience."

Hainan Airlines cabin service director said that the onboard level of service that allowed passengers to feel comfortable and well taken care of proved to be major advantages that led to the winning this prize. The airline provides passengers with onboard services that are more attentive and caring through the airline’s unique "SMILE" concept. The five letters of the word SMILE stand for: Safety & Punctuality, Manners & Elegance, Innovation & Passion, Leadership & Teamwork, and Equality & Love.

World Travel Awards (WTA) was established in 1993 to acknowledge, reward and celebrate excellence across all sectors of the tourism industry. Votes are cast globally by industry professionals in tourism, sightseeing and aviation for dozens of awards including the best hotels, airlines and travel agencies. Winning a World Travel Award has become one of the highest accolades a travel product can receive.

In April of this year, Hainan Airlines was honored as a SKYTRAX Five-Star Airline for the third year in a row. In August, the airline garnered first place in Best Champagne International First Class, Best Red Wine International Business Class and Best Red Wine International First Class by worldwide known business travel magazine Global Traveler. As one of seven airlines worldwide as well as the only one in China to win the SKYTRAX Five-Star Airline award, Hainan Airlines has been unremittingly improving its services and is recognized by worldwide travellers for its quality services.