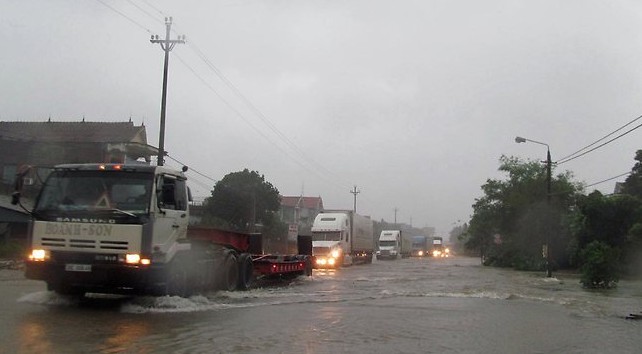 Trucks make their way along highway No 1 linking north and south Vietnam through a flooded portion of the Ky Anh district of Vietnam’s central Ha Tinh province. Source: AFP
VIETNAM evacuated tens of thousands of people from high-risk coastal areas on Monday as a powerful typhoon that left dozens of fishermen missing in the South China Sea slammed into the country.

Vietnam closed schools, ordered all boats ashore and moved some 70,000 people to shelters in vulnerable areas along its central coastline, as high winds and heavy rains uprooted trees and tore the roofs off houses.

Wutip made landfall on Vietnam’s central coast soon after 5pm local time, packing winds of up to 103kph and gusts of up to 133kph, Vietnam’s National Hydro-Meteorological Forecasting Center said.

Authorities scrambled to move people from areas at risk of landslides and flash floods, as soldiers joined efforts to build walls of sandbags around coastal villages.

"This is a big typhoon with strong wind and heavy rain and we urge people to stay overnight in shelters," Nguyen Van Bong, an official in nearby Ky Anh district, told state television.

Local authorities will be "on duty around the clock" to ensure the area’s reservoirs and vast hydro-electric dams are not damaged or made unsafe by the typhoon, he added.

People in central Vietnam told AFP that there were already sporadic power cuts in several districts.

Vietnam is hit by an average of eight to 10 tropical storms every year, often causing heavy material and human losses, as well as frequent flooding.

In recent weeks floods have killed at least 24 people in Vietnam and claimed 30 lives in Cambodia, as well as 22 in Thailand.
Cambodian police said four people – believed to be Syrians, including two children – died late Sunday when their car was swept away in floodwaters.

In China, President Xi Jinping called for an "all-out rescue effort" urging local authorities to "do their utmost to find the missing or stranded and minimise casualties" caused by the typhoon, Xinhua said.

Rescue efforts had been hampered by strong gales and high waves, it said.

The Chinese boats, which were together carrying 88 fishermen, sank after they attempted to navigate gales near the disputed Paracel Islands, about 330km from China’s southern coast.

China’s maritime authority on Sunday raised its alert on the typhoon to orange, its second-highest of four levels, Xinhua reported.

Storm tides might strike the provinces of Guangdong, Hainan and Guangxi, it added, citing the National Marine Environmental Forecasting Centre.
The Paracel islands are claimed by China, Vietnam and Taiwan, but Chinese fishermen often travel there in search of bigger hauls.

China’s civil affairs ministry said 226,000 people were relocated due to that storm and more than 7,100 houses collapsed or were badly damaged.

SOURCE: news.com.au
Editorial Message
This site contains materials from other clearly stated media sources for the purpose of discussion stimulation and content enrichment among our members only.
whatsonsanya.com does not necessarily endorse their views or the accuracy of their content. For copyright infringement issues please contact editor@whatsonsanya.com

Next news: 14 fishermen treated in Sanya after 2 dead, 58 missing near Sansha