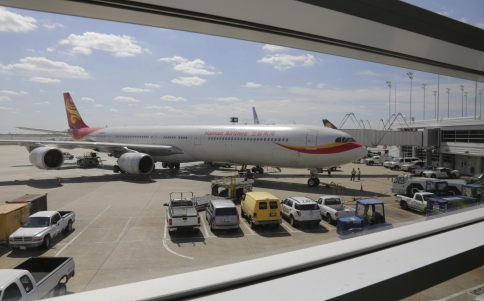 Hainan Airlines is controlled by HNA, which is hit by the long slump in the shipping industry. Photo: AP
Shares in Shanghai-listed Hainan Airlines dropped 3.6 per cent on September 16th as concerns about the financial strength of its parent, HNA, were heightened by the seizure in South Korea of a cruise ship owned by the group.

The vessel, Henna, operated by HNA Tourism, was seized by a Jeju court on Friday at the request of Shagang Shipping, which has yet to be paid the US$58 million arbitral award it won against Grand China Shipping, a defunct unit of HNA, in London in November last year.

It was the latest financial dispute involving the group’s shipping offshoot, highlighting HNA’s chronic debt problem, especially after a series of aggressive acquisitions in the shipping industry in recent years.

HNA, which controls Hong Kong Airlines and Hong Kong Express Airways, diversified into shipping as the down cycle took hold and was taken by surprise by the long-lasting industry slump.

In the latest incident, more than 1,600 passengers and 650 crew members were reportedly on board when the cruise ship was held in Jeju.

Shagang general manager Zhang Jie told mainland media it was not the first time the firm had seized a vessel operated by an HNA firm because the group had failed to pay it US$58 million.

A Jeju official said Henna was due to depart yesterday after HNA Tourism put up a 3 billion won (HK$21 million) bond to lift the court order, Reuters reported.

At Shagang’s request, Grand China Shipping was wound up by a Hong Kong court in April after it ignored the arbitration order.

The dispute arose because Shagang had chartered a capesize vessel to Grand China Shipping since April 2010 but the HNA unit ceased to pay the rental fee after December that year.

Previous news: Sanya all-in-one card to be used for multiple services in near future

Next news: Hainan has world’s only floating sea turtle hospital