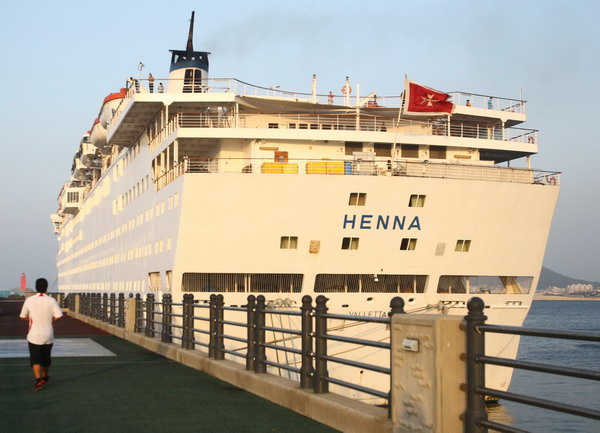 Photo taken on Sept 15, 2013 shows the detained cruise Henna in Jeju Island, South Korea. The first batch of around 280 passengers on the detained cruise Henna in Jeju Island has departed from Jeju for China by plane at 3:20 pm local time on Sunday, according to the Chinese Consulate General in Jeju Island. [Photo/Xinhua]
About 1,120 passengers from the Chinese luxury cruise liner Henna, which is being held at the South Korean island of Jeju, had returned to Beijing on Sunday, the liner’s operator said.

China’s first luxury cruise ship, which had 2,309 passengers and crew on board, has been held since a court order was issued in South Korea’s Jeju province on Friday because of a legal dispute between ship operator HNA Group and Shagang Shipping Co Ltd, a Hong Kong-registered shipping services firm.

HNA Tourism Holding (Group) Co Ltd, is one of the core business sections of HNA Group.

The 223-meter liner departed Tianjin on Wednesday for a six-day voyage with 1,659 passengers and 650 crew on board. It was due to leave Jeju for Incheon on Friday before it was seized.

HNA Tourism Cruise and Yacht Management sent five planes to pick up stranded passengers on Sunday. The first planeload of passengers — 283, including 19 children and one infant — arrived at Beijing at about 5 pm.

"We are very sorry for what happened," said Han Luhai, president of HNA Tourism Cruise and Yacht Management, adding the company arranged the planes to bring back all stranded passengers to Beijing as quickly as possible.

"Some passengers chose to return in the Henna, and the rest of the passengers will all fly back to Beijing by Monday," he said.

HNA Tourism President Zhang Ling said everyone on board was in good condition except for one woman who had had a heart attack, and two teachers and a child who had fevers. All four were hospitalized in South Korea.

HNA Tourism offered all of the passengers 2,000 yuan ($327) in compensation or a free ticket on the Henna for the coming year.

The cruise cost 2,000 to 4,000 yuan per person, according to the quoted price on Caissa Travel Agency.

Han said the Henna will depart Jeju as early as Monday, if everything goes smoothly.

The court demanded HNA Tourism pay a deposit of about $2.7 million for the ship to be allowed to leave, but the money could not be sent to the court because of the weekend, HNA Tourism said.

Chen Junjie, consul of the Chinese consulate-general in Jeju, said the consulate will help the company on Monday with the formalities needed for the Henna cruise’s early departure.

During the detainment, HNA Tourism said that free entertainment and food have been provided to all passengers on board. In addition, a 24-hour hotline was released to the public on Saturday and an emergency team was established to work out a solution.

Some passengers said the services they were offered were not as the company has claimed. A passenger named Liu from Guangzhou said the crew didn’t tell the passengers what had happened until the ship had been held for more than 20 hours, during which all services were charged for.

Some of the passengers were also not satisfied with the compensation offered by HNA Tourism.

A passenger named Huang, who flew back to Beijing on Sunday, said the compensation cannot make up for his losses, but he chose to fly back because he had to return to work.

The South Korean court issued the order after Shagang Shipping applied for a seizure over the alleged legal dispute.

A statement released by Shagang Shipping on Sunday apologized for the inconvenience to the passengers and said it would like to help the Chinese government properly deal with the stranded passengers.

According to the statement, Shagang Shipping won a liquidation order against Grand China Shipping Hong Kong, a subsidiary of HNA Group, for an unpaid $58 million arbitration award in November.

Henna’s operator issued a statement criticizing Shagang Shipping’s cruise ship seizure, which "in fact restricted the personal freedom of those on board and severely infringed upon the rights of innocent passengers". The operator reserved the right to seek damages from Shagang Shipping.

The statement said the company has reported the incident to the Ministry of Foreign Affairs and the National Tourism Administration.

Hao Junbo, a lawyer in Beijing, was quoted by China National Radio as saying it is rare for a cruise liner to be detained, because usually only cargo ships are seized over such legal disputes.

Next news: Russian student Limag found sitting naked in the middle of road in Haikou