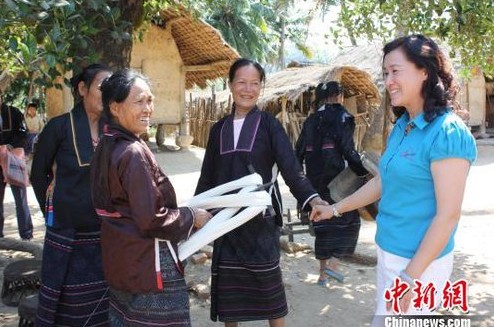 Guo Kai learns how to make Li brocade from women of the Li ethnic minority group. [Chinanews]
For the past few years Guo Kai, a woman entrepreneur from northeast China’s Heilongjiang Province, has dedicated her time and efforts to preserving the art of Li brocade.

"The Li ethnic group respects and worships nature. They think that everything in the world has a soul and they get along with nature harmoniously. The designs and skills of Li brocade reflect these cultural characteristics," Guo said.

Guo became worried about the preservation of Li brocade when she discovered that few people can now weave Li brocade, especially double-sided embroidery. In 2005, she established a company to develop Li brocade products.

Guo launched Li brocade classes in Wuzhishan City in Hainan in the same year, encouraging local Li women to learn the art. Guo buys their finished products and has promised that she will buy their products no matter the quality or the shape of the goods.

"Developing Li brocade is the best way to protect it," Guo said. She believes that combining ancient arts with contemporary trends can help make them popular among the younger generation.

Guo has also established museums to exhibit Li brocade and has spent more than 70 million yuan (US$ 11.438 million) developing and preserving the art over the last eight years.

"I feel a special connection to Li brocade," she said.