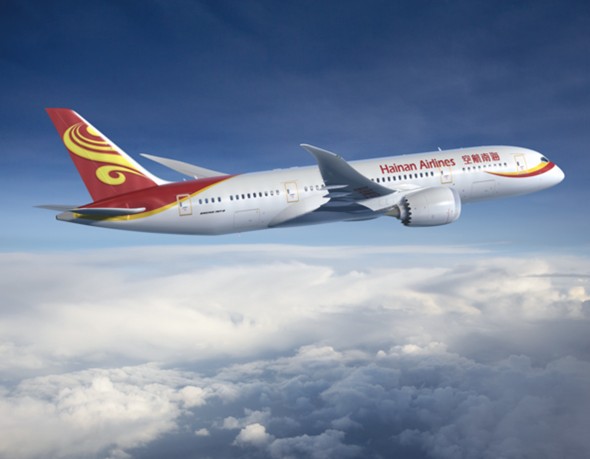 Hainan Airlines expects to introduce a Boeing Dreamliner by year’s end on its new nonstop route between Chicago and Beijing.
On Tuesday, Hainan Airlines begins nonstop service twice weekly on Sunday and Tuesday, between Chicago’s O’Hare Airport and Beijing, China. The frequency is expected to increase to four flights weekly by the end of 2013, when Hainan will introduce the Boeing 787 Dreamliner on the route. The Dreamliner will have three classes of service, business, premium economy and economy. Initially, Hainan will fly the route on an Airbus 330-200 aircraft with economy and business class cabins.

Hainan is the first Chinese carrier to offer service from O’Hare to mainland China. Both Chicago-based United Airlines (NYSE: UAL) and American Airlines fly nonstop from O’Hare to Shanghai and Beijing. The arrival of Hainan at O’Hare reflects a growing demand for travel between Chicago and China among both business and leisure travelers.

Initially Hainan’s arrival in the Chicago market may be creating something of a fare war on the new route between Chicago and Beijing, which takes approximately 13 hours to fly nonstop. According to a Google fare check, Hainan is charging $1,256 for a round-trip flight in economy class departing Chicago on Sept. 10 and returning Sept. 22. On the same itinerary, United’s lowest fare was $1,166 and AA’s $2,216. On any route, of course, fares in economy class will fluctuate based on number of seats sold.

Chicago Department of Aviation Commissioner Rosemarie Andolino said that securing new investment and interaction between Chicago and Chicago is a high priority for the city’s Mayor Rahm Emanuel. Hence the focus on expanding air service.

Chicago will become only the third North American market served by Hainan. The carrier began service to Seattle in 2008. Hainan also flies to Toronto, Canada.

Founded just 20 years ago and headquartered in Haikou, China, Hainan has emerged as one of the world’s premier airlines in a relatively short period of time. In terms of fleet size, Hainan is the fourth-largest airline in China, but it is the largest privately-owned carrier in the country. Hainan also is one of only seven carriers currently given Skytrax’s coveted top five-star ranking. Skytrax is an independent British-based firm that ranks airlines based on product quality.

SOURCE: bizjournals.com
Editorial Message
This site contains materials from other clearly stated media sources for the purpose of discussion stimulation and content enrichment among our members only.
whatsonsanya.com does not necessarily endorse their views or the accuracy of their content. For copyright infringement issues please contact editor@whatsonsanya.com