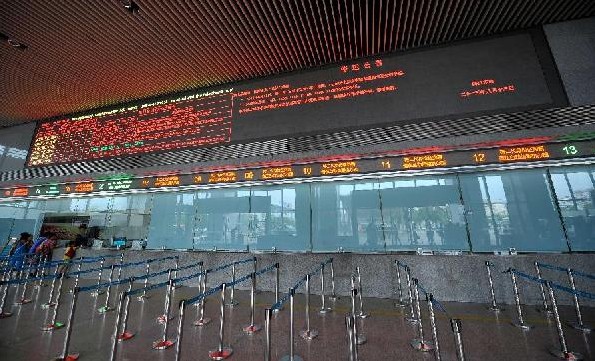 Ticket windows are closed due to the influence of typhoon Utor at the Haikou East Station in Haikou, capital of south China’s Hainan Province, Aug. 13, 2013. Local meteorological department Tuesday raised the alert on strong typhoon Utor to the highest level. Utor has escalated to become a strong typhoon Tuesday morning, and is expected to make landfall in Hainan and south China’s Guangdong Province Wednesday. (Xinhua/Guo Cheng)
Transportation services in south China’s Hainan and Guangdong provinces have been disrupted due to the approach of Typhoon Utor.

According to the National Marine Environmental Forecasting Center, Utor is expected to make landfall in coastal areas between Hainan and Guangdong from Wednesday afternoon to night.

Bullet train services on Hainan’s east coast have been suspended.

Gales and heavy storms are expected to sweep the island province of Hainan from Tuesday to Wednesday, according to the provincial meteorological bureau.

It said Utor is expected to travel northwest at 25 km per hour over the next 24 hours.

The bureau has asked local government departments to prepare for Utor as quickly as possible. Flood control authorities in Hainan have been asked to evacuate local residents who may be badly affected by the storm’s arrival.

Shipping services on the Qiongzhou Strait have been closed and trains that were scheduled to pass through the affected area have also been suspended since 7 a.m. Tuesday, according to the Guangzhou Railway (Group) Corporation.

The company said 500 personnel have been mobilized to inspect ports, highways, banks, tunnels and bridges, as well as make flood control preparations.

The meteorological observatory of the Guangxi Zhuang Autonomous Region, which borders Guangdong, on Tuesday issued an orange alert and initiated an emergency response for Utor, as the typhoon may hit the cities of Beihai and Yulin Tuesday morning.

China has a four-tier color-coded weather warning system, with red representing the most severe weather, followed by orange, yellow and blue.

The National Marine Environmental Forecasting Center said waves as high as 10 meters may appear in the northern part of the South China Sea from noon Tuesday to noon Wednesday.

Those who plan to travel in the affected areas should stay home and coastal authorities should take precautionary measures, the center said.