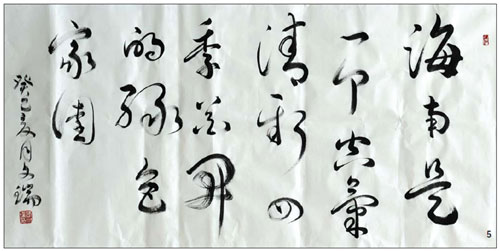 A Beautiful Home for All by Zhang Wenrui
In early July, renowned calligraphers from Hainan gathered in the provincial capital Haikou to present their newly created works for an environmental campaign called "increasing greenness and protecting the blue sky and water".

Xi paid a visit to Hainan in April, when he said the most precious wealth for the tropical province is its healthy environment of green mountains, blue sky and water. He added he hopes local authorities will make continuous efforts to protect the legacy and set an example of sustainable development for the entire country.

As early as 1999, Hainan was the first in China to propose an eco-friendly province.

Over the past decade, the provincial government has invested an average of 270 million yuan ($44 million) annually in environmental restoration. Other entities funded another 26 billion yuan from 1999 to 2012.

By the end of last year, forests covered 61.5 percent of the island, according to the provincial government’s work report released earlier this year. It projects the figure will increase to 62 percent by 2016.

Through their engagement, calligraphers hope to raise the public’s awareness of environmental protection further.

Their artistic creations in various forms including poems, couplets and slogans praise the local achievements and express hope for an even better Hainan.

Next news: Haikou air quality tops 74 major Chinese cities in first half of 2013