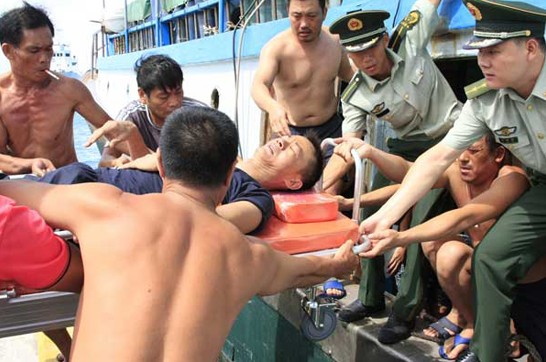 Fisherman Lu Rongzhuan, who is suffering from severe decompression sickness, is evacuated to hospital in Sansha, Hainan province. The Sansha People’s Hospital, which opened on Friday, will soon be equipped with a hyperbaric chamber for the treatment of decompression sickness. Huang Yiming / China Daily
Sweat poured down Lu Rongzhuan’s face. For more than 24 hours, the 43-year-old fisherman had been paralyzed from the waist down and had trouble breathing.

Lu was suffering from decompression sickness, which can cause joint pain, paralysis and even death. The condition is caused by gases dissolved in the blood forming bubbles, and is common among scuba divers who return to the surface too quickly.

Many fishermen working in the South China Sea and near Sansha, a city that was established last July, are familiar with the divers’ disease. Each year, a few die from the condition.

On Tuesday, the fishing ship Lu had been working on, Taishan 61008, sent him to Sansha People’s Hospital on Yongxing Island for initial treatment. A helicopter later picked Lu up from the hospital and sent him to a hospital in Sanya where he received hyperbaric oxygen therapy.

Hu Yaxiong, head of the Sansha People’s Hospital, said Lu likely would have died had he not had proper treatment.

Several deaths occur each year because the victims of the condition are not treated on time, said Chen Hongqiang, a doctor at the hospital.

Officials at the hospital, which opened on Friday, are hoping that its new equipment, which will be set up in September, will reduce the number of deaths. One of the main devices that the hospital will use, said Hu, will be a hyperbaric oxygen chamber.

With an investment of 18 million yuan ($2.9 million), the 2,500-square-meter hospital, the only one in Sansha, can now meet basic health demands for residents and fishermen in the Xisha, Zhongsha and Nansha islands and in surrounding waters. Sansha administers several island groups, and its government is located on Yongxing Island. Sansha has about 3,500 permanent residents with another 25,000 immigrant workers, who mainly live in Yongxing Island.

The hospital is expected to offer comprehensive medical services in five years, said Xu Jie, deputy mayor of Sansha. The hospital currently has 30 beds, but that will increase to 100 over the next five years, he said.

Staff numbers will also increase from eight to 35 in the near future to cover fields such as pediatrics and gynecology.

In the next two years, doctors from Hainan Provincial People’s Hospital will also go to Sansha to train local doctors, Hu said.

SOURCE: peopledaily.com.cn
Editorial Message
This site contains materials from other clearly stated media sources for the purpose of discussion stimulation and content enrichment among our members only.
whatsonsanya.com does not necessarily endorse their views or the accuracy of their content. For copyright infringement issues please contact editor@whatsonsanya.com

Next news: Hainan Airlines to operate Donetsk-Haikou flights from October