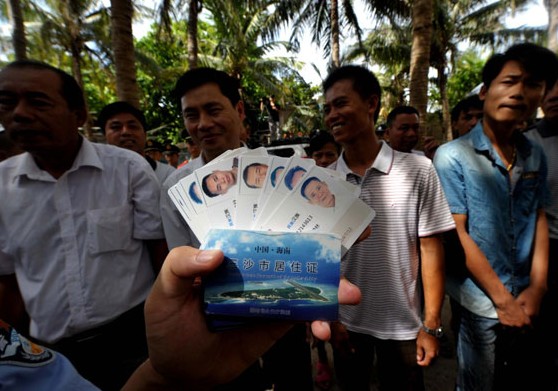 Residence permit cards are issued to residents in Sansha city, South China’s Hainan province, July 17, 2013. The first batch of 10 identification cards and 68 residence permit cards are being issued to Sansha residents one year after its establishment. As China’s youngest city, Sansha was officially set up last July on Yongxing Island in the South China Sea. The city administers three island groups – Xisha, Zhongsha and Nansha – and the surrounding waters in the South China Sea. [Photo/Xinhua]
The first phase of a dock in Sansha City, in South China’s Hainan province, was put into use on Thursday after the project’s completion.

The first stage construction of the dock on Yongxing Island, a seat of Sansha City, has taken three years to build, costing 339.5 million yuan ($55 million dollars).

The second phase of the dock is being planned.

Sansha City was officially established in July last year to administer the Xisha, Zhongsha and Nansha islands and their surrounding waters in the South China Sea.

Previous news: Journalists investigating claims against Tech firm in Haikou get roughed up