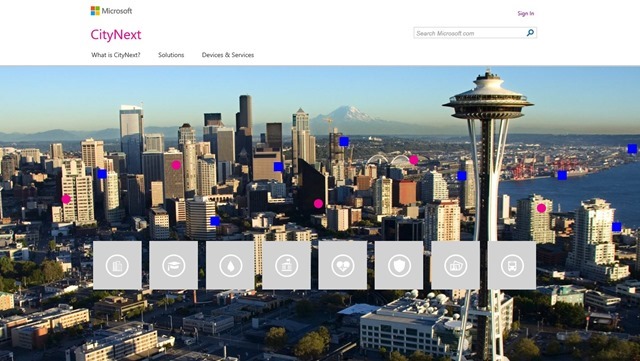 Microsoft on Wednesday announced CityNext, a global initiative intended to develop "smart cities" around the world. Unveiled at the company's Worldwide Partner Conference in Houston, the plan leverages Microsoft's Partner Network to help cities become more efficient even as they struggle with austere budgets and decaying urban infrastructure.

If CityNext succeeds, cities will improve efficiency by installing Microsoft products that harness the cloud and big data.

Mobile access to big data tools and cloud-powered enterprise apps could give workers on-demand access to advanced analytics, with sources ranging from vast databases to real-time data culled from environmental sensors. In theory, these technologies should allow workers to more quickly derive insights, collaborate with one another and come to decisions. This sort of efficiency could not only save lives during an emergency but also drive day-to-day savings that total millions, and perhaps even billions, of dollars over time.

That sort of cost-reduction will take a while to develop, of course. The case studies Microsoft revealed Wednesday were more modest. The company introduced Barcelona, Spain, as a CityNext customer, for instance, that used Azure to host a platform that aggregates city statistics and makes them publically available. Via an app, citizens can monitor fluctuations in areas such as population density and total unemployment — information that could hypothetically lead to more informed economic decisions, such as whether to open a business, start a family or purchase a home.

Smart cities are commonly associated with companies such as IBM and Cisco, and, more broadly, concepts such as the Internet of Things (IoT). Microsoft's IoT interest is comparatively less publicized but the company has nonetheless been working within this space for a number of years.

IoT touches on the connected multi-device ecosystem that the company is trying to build around Windows 8, for instance, but other examples range from earlier work on "smart cities" to the massive surveillance system the company built for the NYPD. Products such as Windows Embedded, which can be installed in point-of-sale devices and other end points on the edge of the network, also factor into this theme.

Microsoft missed out on the first wave of mobile apps, while Google and Apple both capitalized. But Microsoft's efforts suggest the company is intent on catching the next wave, which is likely to involve cloud apps and big data as much as mobility itself. The company's executives don't say "Internet of Things" nearly as often as they say "Azure," but Steve Ballmer's vision of the connected future — and Microsoft's role in it — is becoming more defined. That said, it's still not clear how all the pieces will fit together, both within the Windows ecosystem, and among the non-Windows connected devices in the larger IoT landscape.

In addition to CityNext, Microsoft also announced a Windows 8 Digital Flight Bag, a cloud-based product that allows F16 fighter pilots to replace cumbersome physical manuals with a variety of private apps. Apple's iPad has been used in a similar fashion.

SOURCE: visithainan.gov.cn
Editorial Message
This site contains materials from other clearly stated media sources for the purpose of discussion stimulation and content enrichment among our members only.